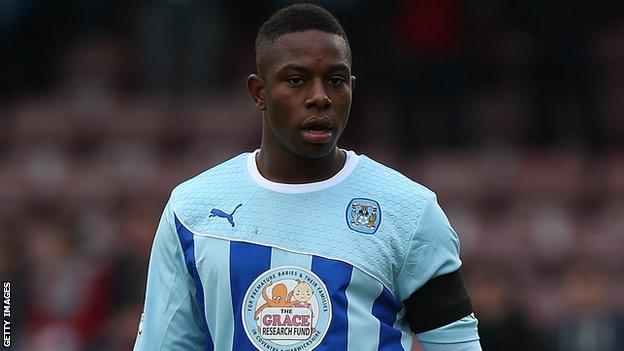 Franck Moussa struck the only goal of the game as Coventry City claimed their fourth win in five matches with victory at Walsall.

The Sky Blues midfielder slotted his seventh of the season from close range on 54 minutes after home keeper Richard O'Donnell had brilliantly kept out Leon Clarke's header.

Coventry came close to a late clinching second at the Banks's Stadium.

Walsall's Bescot home was one of the grounds discussed as a potential venue for Coventry City's home games this season, following their dispute with their landlords at the Ricoh Arena.

But O'Donnell went low to his right to turn aside Callum Wilson's shot.

Both sides had chances to break the first-half deadlock.

But visiting keeper Joe Murphy then made a great late first-half save, diving to his left to keep out Craig Westcarr's 20-yard free-kick before home skipper Andy Butler's low shot was deflected wide.

Coventry, watched by 2,138 away fans - more than turn up to watch home matches at Sixfields - climb to 13th in League One, while Walsall drop out of the top six after their second home defeat of the season.

"I thought it was an excellent away performance. We nullified them to next to no chances, and that was a testament to our players' work rate.

"We seemed very much together as a team and supporters together at the end there.

"It's been a wonderful run of games and for us to come through October with no defeats is incredible. At this moment in time our players deserve so much credit."