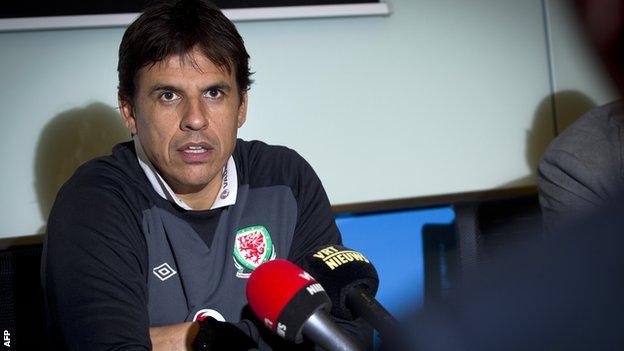 Chris Coleman has not decided if he wants to carry on as Wales manager after his contract runs out next month.

Coleman leads Wales in their final World Cup qualifier in Belgium on Tuesday before taking charge of a home friendly with Finland on 16 November.

"I can see the reasons why I or anyone would want to lead the team [into the Euro 2014 qualifiers]," he said.

"We have got some very good players and you are always thinking if we could have them all fit, but does it happen?"

Coleman added: "Having two years experience of it, I say if the same happens again and we are without certain players for long periods of time, how can I or anybody else affect that?"

Reflecting on the World Cup qualifying campaign, Coleman said unrealistic pressure was placed on his side before a ball was kicked.

"There has never been a sixth seed in a group that has qualified yet," Coleman added.

"But the expectations going into it were that we've got to qualify, which was largely down to one or two people outside the group putting that pressure on.

"I know we've had too many defeats, and there are no excuses, but if you look at the teams we have been up against I don't think there is a tougher group.

"People look at it and say we have not qualified again but how can I affect working for my country going forward if we haven't got everybody on the pitch for a sustained amount of games?

"Do I want to deal with that again? I don't know."

The 43-year-old added that he would not make his decision until after the next two matches.

"I wouldn't get drawn into it now as I want to concentrate on the Belgium game," he said. "I know for some people there is not so much on it but for me and the players there is everything on this game.

"It is another international which we want to do well in. We've also got Finland and I won't stray from that - I wouldn't speak to anyone about what I am doing after that, I just want to concentrate on this and the job in hand."

One decision Coleman will have to make is whether to give a senior debut to 16-year-old Liverpool winger Harry Wilson.

The teenager has an English grandfather and there has been speculation that England may make a bid to get him to switch international allegiance.

But Coleman said: "I spoke with Harry at length and we have obviously spoken with Liverpool

"We had a chat with his parents, who are both from Corwen in north Wales, on Friday.

"I won't put him on just to give him a taste of it but he's impressed us in training and I probably would have put him on on Friday night if we had scored the penalty, for the last five minutes.

"It may have given him a taste of it but he is still very young and that is what I said to his parents.

"Maybe it is a bit early for him but he is experiencing it [being in an international squad] and we will see what happens in Brussels."