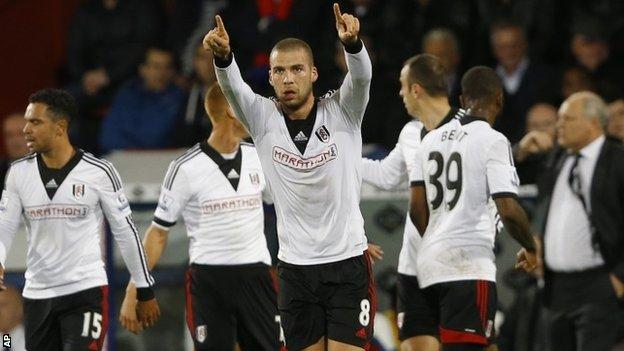 Adrian Mariappa's early header put the Eagles ahead, only for Kasami and Sidwell to give Fulham a 2-1 lead.

Dimitar Berbatov's header and Philippe Senderos's scissor kick made certain shortly after the break as Fulham eased the pressure on manager Martin Jol.

But Palace's worries continue after a seventh defeat in eight league games.

The Eagles remain 19th but are now five points adrift of safety.

However, the picture is starting to look more positive for Jol and his team after they made it back-to-back victories in the Premier League for the first time this season, lifting them to 14th and within one point of Manchester United in eighth.

Eagles manager Ian Holloway said before kick-off his team planned to "go for it" and they were true to his word, making a purposeful start before taking a seventh-minute lead.

Fulham could only half clear a Palace corner and the ball was worked back out to Jason Puncheon, whose cross from the left was headed home by Mariappa with a fine leap which saw the 5ft 11in defender outjump 6ft 6in Brede Hangeland.

Yet within 12 minutes Jol's side levelled with a stunning strike from Kasami which transformed the complexion of the game.

Sascha Riether's floated pass down the channel was taken on the chest by Kasami on the right-hand edge of the penalty area and, in one fluid movement, he unleashed a stunning dipping volley on the angle up and over Palace goalkeeper Julian Speroni into the top-left corner.

Having lost their momentum, Palace suddenly looked a deflated side and Fulham took full advantage.

Another moment of brilliance arrived on the stroke of half-time when Bryan Ruiz's free-kick bounced back off the wall to Sidwell, on the edge of the penalty arc, and the midfielder smashed a first-time volley into virtually the same spot as Kasami.

Palace have made their worst start in the top flight since 1980-81, when they were eventually relegated after an identical return from the same number of matches

After the break the Cottagers picked up where they left off and a mistake by Speroni gifted the visitors a fine chance when he cleared the ball straight against Berbatov, who cleverly fed Darren Bent to leave the striker with just the goalkeeper to beat. But the Argentine redeemed himself with an excellent reflex save to turn the striker's vicious shot around the post.

Speroni's relief was to prove short-lived, however, as from the resulting corner Berbatov met Ruiz's delivery with a typically deft header into the far corner for his first league goal of the season.

Five minutes later Holloway's side were undone from a set-piece once more as Senderos, left unmarked at the far post, claimed a rare goal with an acrobatic shot from another Ruiz corner which squirmed underneath Speroni.

A frustrating night for the home team was compounded when a Kieran Richardson error eventually led to a chance for Eagles' record signing Dwight Gayle, whose first shot was saved before he converted the rebound - only to be flagged offside - as Palace slipped deeper into trouble.

"We started well but this division is ruthless. That first goal was something else and it knocked us a bit. We then made mistakes at set-pieces. It's an unforgiving division but we must bounce back.

"There were plenty of good things. Once you get into a run like this it's very disheartening and you could see that in the players. We huffed and we puffed but Fulham were well on top by then. It's very tough to take.

"You need some building blocks of confidence to work on. The lads are smarting now and that's five defeats in a row. We're normally good at corners but it's one or two people making a slight mistake because we have the stuffing knocked out of us.

"A win will turn it right around. There is lots to do but I can't fault the effort. We have to believe that we have the quality."