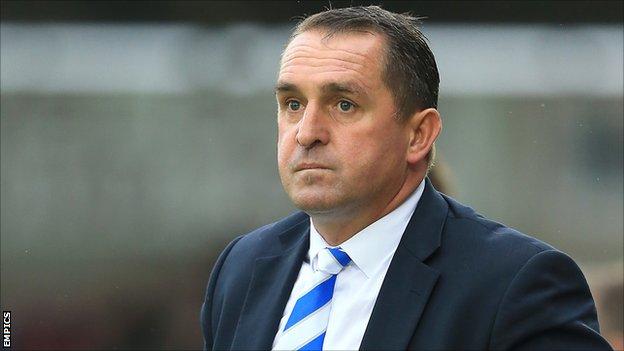 Gillingham have sacked manager Martin Allen after 16 months in charge.

Allen, 48, led the Gills to the League Two title last season but they had won just two of 11 league games this term.

"It is with great regret that the club announces the contract of Martin Allen has been terminated with immediate effect," the club statement read.

"The club would like to place on record its deepest gratitude to Martin for all his hard work over the past period and indeed for achieving promotion."

He becomes the third League One manager to be dismissed this season, after Carlisle's Greg Abbott and Sheffield United's David Weir.

Gills won the League Two title in 2012-13, winning 23 and losing just nine of their 46 league games but the step up has proved difficult.

It took the Priestfield club 10 games in all competitions to record their first win, beating Crewe at Gresty Road in late September and they followed that with a 3-2 victory at home to MK Dons.

However, Saturday's 2-0 defeat by Shrewsbury was to be his last in charge.

"It is always a hugely difficult time when a managerial change occurs and this moment is no exception," said chairman Paul Scally.

"Whilst the decision taken was made unanimously by the board, it was an exceptionally difficult one, but one which after long deliberation was felt absolutely necessary.

"I would like to wish Martin every success in his future career. I have no doubt he will be back managing very shortly and I have very much enjoyed the experience of working with him, on both a business and personal level over the past 16 months."

He won 27 of 64 games at Gillingham in total, with 20 defeats - of which eight were recorded this season.

Former West Ham midfielder Allen, nicknamed 'Mad Dog' during his playing days, made the step up to management in 2003 at then non-league club Barnet - with whom he had three stints - and has enjoyed varying degrees of success with seven clubs including Brentford, MK Dons, Leicester and Notts County.