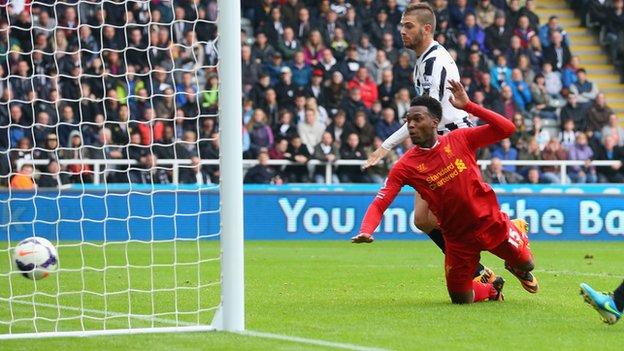 Liverpool twice came back from a goal down as they had to settle for a point against 10-man Newcastle.

Yohan Cabaye's 30-yard strike put the hosts ahead, but Steven Gerrard levelled with a penalty at the end of the first half after Mapou Yanga-Mbiwa was sent off for a foul on Luis Suarez.

A Suarez shot skimmed the crossbar as Newcastle held on for a draw.

Liverpool dropped down to third in the Premier League after being overtaken by Chelsea, who beat Cardiff, and Brendan Rodgers's side may be disappointed not to have made more of having an extra man for so much of the game.

The Magpies were thrashed 6-0 in the same fixture last season, but showed defensive determination and organisation this time around to nullify Liverpool early on.

And the home side built on their promising start when the Reds defence stood off Cabaye, allowing the France international to send a dipping shot past goalkeeper Simon Mignolet.

The visitors's best chances were coming from set-pieces and Newcastle left-back Davide Santon, guarding the far post, had to clear a Suarez header before Martin Skrtel and Aly Cissokho nodded over when well-placed.

"Having played from just before half-time with 10-men against Liverpool, the point will do Newcastle very nicely. This fixture rarely disappoints and it was full of action and incident."

The centre-back was the last man when he fouled the Uruguayan and was shown a red card before Gerrard confidently dispatched the spot-kick for his 100th league goal.

The Reds looked to take advantage of their numerical advantage and right-back Glen Johnson forced Newcastle keeper Tim Krul into a scrambling save.

However, defender Dummett - who had come on after Yanga-Mbiwa's dismissal - shocked the visitors by steering in Cabaye's free-kick to restore the Magpies's lead.

This was the signal for Liverpool to pile the pressure on the home side and a Suarez shot was parried by Krul before being cleared.

The Reds finally breached Newcastle's stubborn defence when Suarez got to the by-line and crossed for Sturridge to head in from close range.

The visitors continued to dominate and Suarez clipped the bar with a shot before seeing his injury-time free-kick saved - but they failed to force a winner as Newcastle, who next face rivals Sunderland, greeted the final whistle with relief.

"I thought it was great advertisement for the Premier League. In the opening period of the game, when we had 11 players, we were matching them.

"Then we had the guy sent off and I have no qualms about that, he had to go. So we had to show our other side - the resilience. We showed it before against Cardiff and we showed it against Liverpool.

"It was a great game on the pitch there as real quality."

"It was a very good game and one we are obviously disappointed not have got three points from.

"It has been difficult; we had 13 players away playing two games in the international break. To show the character we did, as well produce some of the play we did, was outstanding.

"We are disappointed not to get all three, but to come back twice I think the point was the least we deserved. We are on the right path and this point could be important at the end of the season."