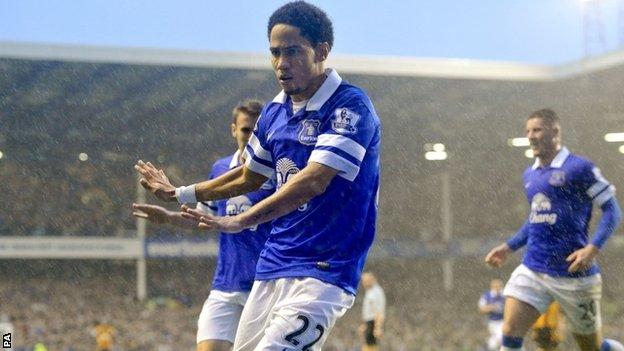 Steven Pienaar scored 10 seconds after coming off the bench at the end of his injury lay-off to score Everton's winner against Hull.

Kevin Mirallas drove in from just outside the area to put the home side ahead in the eighth minute.

Hull responded when substitute Yannick Sagbo turned in from Sone Aluko's cross after half an hour.

Not bad at Goodison Park

Everton have taken 25 points from their last nine home matches in the Premier League with West Brom the only team to avoid defeat at Goodison Park in the league since February.

But Pienaar, out since August with a hamstring injury, swept in from a Mirallas cross with his first touch.

Looking shaky at corners, particularly in the first half, Everton were a long way from their fluent best.

But they showed quality when it mattered to take the points and the return of Pienaar, 31, who has formed a fruitful partnership on the left flank with Leighton Baines is positive for manager Roberto Martinez.

Just as in the defeats at Chelsea and Manchester City, the Tigers never looked overawed and even as they slipped to a third loss of the season, this was a display that will add to their belief that they can stay in the Premier League.

Everton striker Romelu Lukaku had already had a low effort held by Allan McGregor before the hosts went ahead after seven minutes.

Hull failed to clear a Baines corner and Leon Osman squared to Mirallas, whose low effort flew past Gareth Barry, standing in an offside position, and the motionless McGregor into the bottom corner.

Tigers manager Bruce, who was also angered by a couple of challenges by Barry, felt the goal should not have stood whether the Everton midfielder touched it or not.

Hull moved level when Aluko beat Baines and clipped over a low cross for Ivorian Sagbo, a summer signing from Evian, to thump in at the near post for his first Premier League goal.

Just before the interval, Aluko had a drive deflected over by Sylvain Distin and then had a header blocked on the line by Baines after Faye once again got his head to a Huddlestone corner.

Martinez's side controlled possession from the start of the second period but Hull almost took the lead when Jake Livermore's drive glanced wide off Sagbo.

But Pienaar's introduction swung the game back in Everton's favour, with the South African turning in a first-time shot from Mirallas's cross to finish a slick passing move that started with goalkeeper Tim Howard.

Faye and Davies had further chances from corners before Arouna Kone missed a fine chance to add a third for Everton when he hit the post from six yards from Seamus Coleman's cross.

"I've watched it six or seven times and it's impossible to tell [whether Barry got a touch]. Even if he touched it minimally the referee couldn't see it. If the referee's not sure he has to let it go.

"When I saw [Barry's tackle on Aluko] live I felt he won the ball. The pitch was open to those sorts of challenges. The referee handled it in a common sense manner and was consistent.

"It wasn't our normal stylish way but we got the three points."

"The big decisions went against us. Gareth Barry ran away celebrating the goal and that indicates he touched it. Even if he hadn't he was interfering.

"Gareth Barry is a fantastic pro but his tackle on Aluko was a red card. Those tackles that are over the top of the ball can badly injure people. The big decisions went against us and you expect the officials to get them right. The Aluko challenge was a disgrace.

"The positives have been there all season. We are a good group that are desperate to do well and we'll make a fist of it I'm sure of that."