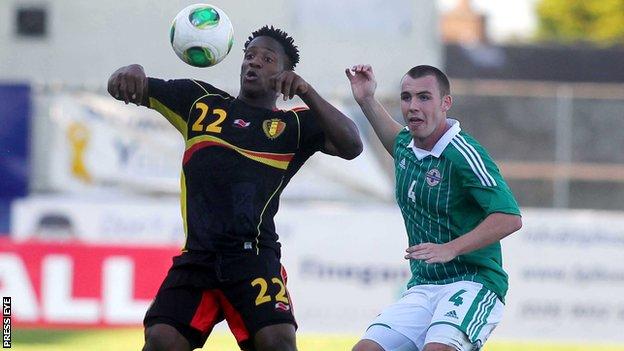 Northern Ireland Under-21s remain without a point in their European Championship qualifying group after this home defeat by Belgium.

Michy Batshuayi's 44th-minute goal at Mourneview Park proved enough for the Belgians who maintain their 100% record in Group Nine.

The Belgians dominated for the most part although Shay McCartan did hit the woodwork in the second half.

McCartan also went close with a long-range effort in injury-time.

Belgium included Monaco midfielder Yannick Ferreira Carrasco, who has been valued as a £20m player.

Carl Winchester tested Belgian keeper Colin Coosemans as Northern Ireland attempted to find a breakthrough but were soon on the back foot again.

Jordan Lukaku, younger brother of Everton loanee Romelu, and Monaco star Yannick Ferreira-Carrasco had attempts for Belgium, before Batshuayi put them ahead in the 44th minute.

Jonny Gorman came on in place of Rhys Sharpe at half-time, with Brennan doing well to keep Mpoku at bay after the restart.

Ferreira-Carrasco missed the target with a great opportunity in the 59th minute and Laurens De Bock was denied as the clock wound down, before McCartan came agonisingly close by hitting the woodwork.

McCartan had another effort in stoppage time but Coosemans denied the Burnley striker to leave Northern Ireland still without a point after their first three qualifiers.