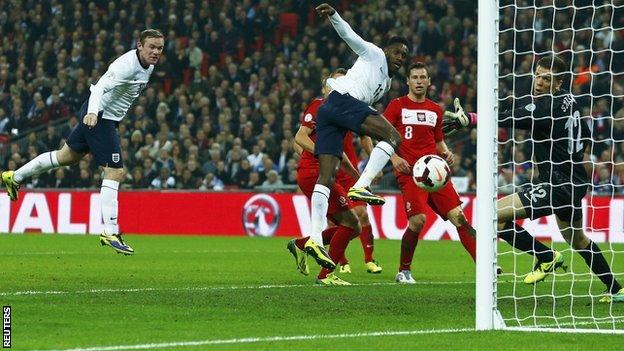 England confirmed their qualification for next summer's World Cup in Brazil with a thrilling victory over Poland at Wembley.

Roy Hodgson's side needed three points from their final qualifier to secure top spot in Group H after Ukraine's 8-0 win in San Marino.

However, they had to survive anxious moments before the target was finally achieved.

Wayne Rooney, as he did against Montenegro last Friday, broke the deadlock, heading in a perfect cross from the outstanding Leighton Baines four minutes before half-time.

"England have been professional. In some performances, they have struggled against weaker nations.

"We are going to be playing against the top nations in the world. That is when the fun starts.

"We have to get our better players playing to the best of their ability. The only worry is that we play a 4-4-2, and teams like Brazil and the Netherlands will note that."

Poland, backed by about 20,000 supporters who contributed to a colourful and vibrant Wembley atmosphere, threatened through Robert Lewandowski before captain Steven Gerrard eased any fears of a late twist with a surging run and finish two minutes from time.

England manager Hodgson raced from his technical area in delight before enjoying a fully deserved celebration with his backroom team at the conclusion of an unbeaten and ultimately successful qualification campaign.

England went into their two final games, against Montenegro and Poland, needing six points, and Hodgson's team duly revealed a fresh face as progressive attacking football - bordering on reckless at times - replaced the caution that coloured many of their earlier qualifiers.

Now they can join what is expected to be the biggest football carnival of all in the spiritual home of the game in South America.

And their supporters will travel in force, with almost 97,000 applications already received from England even before qualification was assured.

England may not be among the favourites in Brazil but if Hodgson can build on the optimism of these final two games and nurture more young faces then they can at least travel in hope.

They relied heavily on two of their experienced players on Tuesday in goalscorers Rooney and Gerrard - but once again the exciting Tottenham winger Andros Townsend looked a perfect fit for international football.

Baines also delivered a magnificent display and it is hard to see how Hodgson could justify replacing him with Ashley Cole, out injured, on the strength of the Everton defender's performances in the qualifiers.

Hodgson made a somewhat surprising choice at right-back, where Chris Smalling was selected ahead of Manchester United team-mate Phil Jones to replace the suspended Kyle Walker.

With Michael Carrick in for Frank Lampard in midfield England went through a period of adjustment in the opening phase and were almost punished by a lively Poland.

The main threat, inevitably, was Lewandowski and twice he broke on England from their own corners, first forcing a save from goalkeeper Joe Hart and then dragging an angled chance - which he created for himself - across the face of goal.

England, however, soon settled and started to play with some of the attacking abandon that was the hallmark of Friday's win against Montenegro.

A longer road to Rio

From the nine European World Cup qualifying groups, eight teams will enter a two legged play-off for one of four places in Brazil. They are: Croatia, Sweden, Romania, Iceland, Portugal, Greece, Ukraine and France.

As in that victory Baines and Townsend were outstanding, with their width and threat giving England an added attacking dimension.

Arsenal goalkeeper Wojciech Szczesny could only parry Townsend's shot and Welbeck directed his header wide from the rebound as England finally took control.

Welbeck was working hard but suffering frustration in front of goal, losing his footing when played in and then missing the target from six yards as Poland failed to clear a corner.

In among a frenzy of attacking action Townsend sent a rising left-foot drive against the post and Szczesny recovered well to block Daniel Sturridge's effort as he looked to profit from the loose ball.

Just as memories of 1973 - when Poland got a draw to wreck Sir Alf Ramsey's hopes of reaching the next summer's World Cup - were being revived England finally made the breakthrough.

Baines, demonstrating his high class once more, delivered a perfect left-flank cross on to the head of Rooney - without his headband for a few moments - and he scored in accomplished fashion after 41 minutes.

"Leighton Baines was outstanding again - especially in the first half when he created Wayne Rooney's goal. Can Roy Hodgson really justify recalling Ashley Cole? Man of the match."

In a wonderfully open game, chances continued to come at the start of the second half - and a Polish substitution almost brought an instant result when Mateusz Klich, on for Mariusz Lewandowski, forced a desperate block from Gary Cahill.

Welbeck then shot across the face of goal and Cahill had a header turned away as England pressed to extend their advantage and at least give themselves some level of comfort.

This was never going to happen while they only led by one goal and the menacing Lewandowski was around. He found space behind England's defence on the hour but Hart did well to block.

The game was too open for Hodgson and England's liking but they were still creating chances of their own, Szczesny showing great athleticism to leap to his left and turn away Rooney's curling effort.

Hodgson made his first change with 20 minutes left, sending on Lampard for Carrick, who had performed well, in an attempt to keep England on top.

Poland keeper Szczesny had also excelled and he was in action once more to save from Sturridge, who was then replaced by Jack Wilshere with nine minutes remaining.

As the clock ticked down to qualification, England's fans demanded one last push and Gerrard provided it with a determined run into the Poland area and a prodded finish beyond Szczesny - and the celebrations could finally begin.