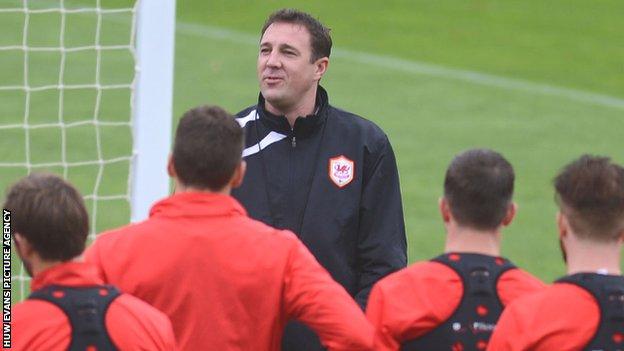 Cardiff City manager Malky Mackay says he turned down the chance to be assistant manager at Newcastle United before joining the Bluebirds.

Mackay was manager at Watford when he was offered the chance to be Alan Pardew's number two.

Instead, the Scotsman joined Cardiff and led them to the Premier League, where they face Newcastle on Saturday.

"We had a conversation about me going up there as his number two, but it didn't happen," said Mackay.

The pair are friends from their time at West Ham when Pardew was manager and Mackay his captain.

And they are still in regular contact to talk about football matters.

"He's someone I've got a lot of respect for we talk regularly, and have done regularly since my time at West Ham with him."

"He's a good friend of mine," said Mackay.

"He's been certainly a mentor for me over the past few years in terms of conversations we've had.

"I was his captain at West Ham. He's a good friend of mine and he's done a very good job at Newcastle.

"He's someone I've got a lot of respect for we talk regularly, and have done regularly since my time at West Ham with him."

However, Mackay added he had no regrets about staying on at Watford and then taking the manager's role at Cardiff following the departure of Dave Jones.

Cardiff go into Saturday's home game on the back of their first away win since returning to the Premier League.

The 2-1 victory at Fulham lifted the Bluebirds to 11th in the table with eight points, one point more than their visitors who were beaten 3-2 at Everton in their last outing.

However, Mackay says he's reading little into that result, especially after Newcastle fought back in the second half after conceding three early goals.

"He was playing against a very good team, you have to say and a team that have done very well so far," added Mackay.

"In the second half they played like the Newcastle I've seen mostly over the past couple of years since he went there.

"They nearly nicked a draw which would have been unbelievable on the night so I'm expecting nothing other than a really tough game against a team who on their day when they attack can take anybody apart."

Cardiff have no injury worries other than the long-term problem for Danish striker Andreas Cornelius who Mackay says is making progress, but is still some way from a return to action.