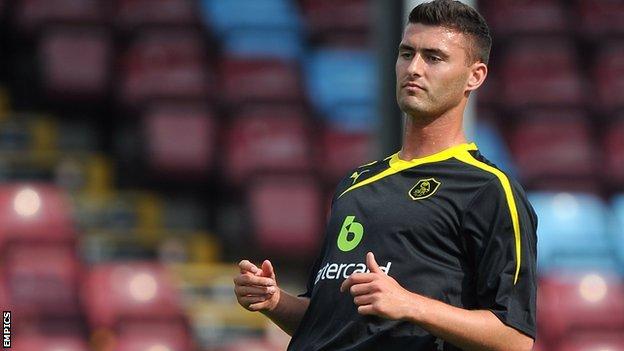 Sheffield Wednesday striker Gary Madine is to rejoin the squad on Thursday following his release from prison.

Madine, 23, was jailed for 18 months for two unprovoked assaults on fans in Sheffield nightclubs in October.

He was released last week and former club Carlisle expressed an interest in taking him back.

"First and foremost, Gary is remorseful and has apologised to all those affected," Owls chairman Milan Mandaric told the club website.

"He has made some serious errors of judgement and is the first to take ownership of that situation and the consequences that followed.

"We can only condemn his actions as a community-focused football club and make it abundantly clear that no further breach of club rules will be tolerated.

"However, we are of the belief that Gary will try his utmost to put this episode behind him, whilst never forgetting the impact of his actions.

"In addition, we firmly believe the club can play a key, hands-on role in facilitating Gary's rehabilitation back into the professional working environment."

Madine, who is under contract until the end of next season, has scored 26 goals in 91 league appearances for the Owls after joining them from Carlisle in January 2011.

He added: "I am grateful to Sheffield Wednesday for giving me this continued opportunity and I can only promise never to let the club or anyone else down in this manner again."