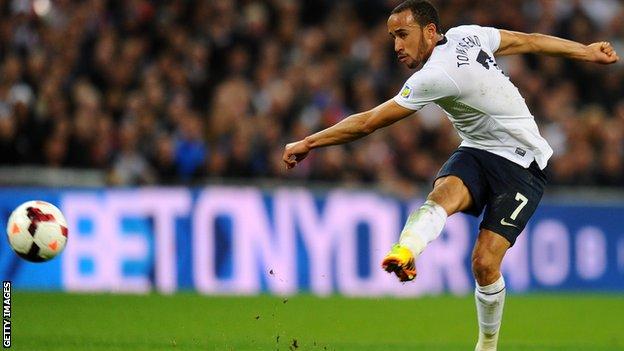 England require victory over Poland at Wembley on Tuesday to reach next summer's World Cup in Brazil after a convincing win against Montenegro.

Tottenham winger Andros Townsend rewarded manager Roy Hodgson's surprise decision to give him his international debut with an outstanding display that brought next summer's showpiece clearly into view.

Talk of the Townsend

"Andros Townsend was Roy Hodgson's surprise selection but he created the first goal, scored a superb third and was a real threat throughout."

Dejan Damjanovic threatened to set up an anxious finale when he pulled a goal back in a rare moment of danger from the visitors.

But it was fitting that Townsend should add his own even more significant contribution - a low, swerving finish past Montenegro keeper Vukasin Poleksic to restore England's two-goal advantage.

Daniel Sturridge's injury-time penalty put added gloss on an England performance which fully merited the outcome and will have lifted confidence ahead of another crucial Wembley meeting with old adversaries Poland, who famously blocked their path to the 1974 World Cup.

England top the group with 19 points, one ahead of Ukraine going into the final round of matches.

And, though England spirits will be high, that historic example of Polish defiance, coupled with the knowledge that Ukraine meet minnows San Marino in their final game, will leave Hodgson aware of the work to be done to clear the final hurdle.

The England boss exuded positivity in the pre-match build up and that was reflected in a bold team selection - with Townsend chosen ahead of James Milner.

Apart from very isolated moments, England spent most of the first half in Montenegro territory without being able to convert the chances that came their way.

Everton's Leighton Baines, deputising for the injured Ashley Cole, was a standout performer as the home side dominated possession and territory, creating chances for Welbeck and captain Steven Gerrard that brought saves from Poleksic.

England's best chance of the half came when Townsend's shot was pushed out by Poleksic and Rooney could only hit the outside of the post from an angle when he should have scored.

And in a frantic conclusion to the half, Welbeck saw a shot deflected wide, while Sturridge was off target and had another shot blocked.

With news of Ukraine's win against Poland confirmed during the interval, England's urgency for a goal increased - and it was Rooney who obliged four minutes after the restart.

So much of the credit must go to Townsend, who picked out Welbeck after a long, surging run down the right flank. Poleksic again failed to hold the Manchester United striker's shot and Rooney was lurking to complete the job.

The goal stung Montenegro into action and Joe Hart was forced into his first serious work of the night to turn away Damjanovic's header from Nikola Drincic's free-kick.

England's second goal had an element of farce as Boskovic turned Welbeck's effort into his own net, but that signalled Montenegro's most threatening spell of the game.

Manchester City's Stevan Jovetic struck the bar from 25 yards then Damjanovic poached a goal as he turned Fatos Beqiraj's shot past Hart.

Townsend's spectacular strike settled any nerves and Sturridge got on the scoresheet from the spot after he had been fouled by Ivan Kecojevic to complete a highly satisfactory night for Hodgson and England.

Shots on Target
Home12
Away2