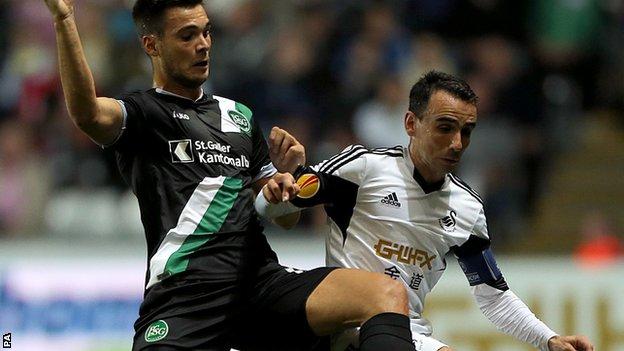 Leon Britton says Swansea showed good character against St Gallen with a win which puts them in a strong position in their Europa League group.

Wayne Routledge's second half goal secured a hard-fought 1-0 victory over the Swiss side at the Liberty Stadium.

Swansea are top of Group A after two wins out of two and next face Kuban Krasnodar on 24 October.

"We're in a strong position I think," Britton said.

"You can't ask much more than getting six points out of the two games [and] two cleans sheets."

Victory over Russian side Kuban Krasnodar, who are yet to win in Group A, would see the Swans reach nine points and in a strong position to reach the last 32.

But Britton, who captained the Swans in the absence of the injured Ashley Williams, refused to get carried away by his side's impressive start.

"It's been a fantastic start but that's all it is, a start," Britton said.

"There are still four games to go and we want to make sure we finish the job and qualify from the group.

"Hopefully if we can get the result [against Kuban Krasnodar], although it's going to be very tough, that will take us to nine points and halfway through the group stage.

"You would hope you'd have one foot into the next round but it's still going to be very tough and we need to keep our feet on the ground.

Michael Laudrup's side face back-to-back games against Kuban Krasnodar before facing Valencia at home and finishing away to St Gallen in December.

But the 31-year-old midfielder said he was satisfied with what he described as an "ugly" win which came courtesy of Routledge's 52nd minute tap-in.

"It wasn't our greatest performance passing wise but it was a gritty performance," Britton said.

"I think we showed good character out there and it was important for us to follow up with a result after the Valencia game.

"Although it wasn't pretty out there we came away with three points and that's what we wanted."