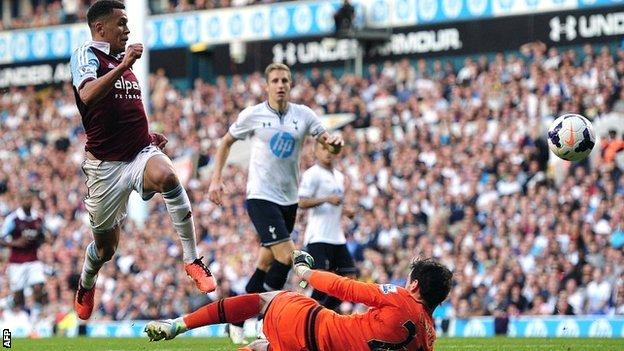 Ravel Morrison scored a superb solo goal as West Ham earned a vital win against Tottenham to climb out of the Premier League's bottom three.

Winston Reid's close-range effort just after the hour gave the Hammers a first away goal of the season.

A ricochet off Ricardo Vaz Te doubled the lead before Morrison ran the length of the Spurs half to chip in.

West Ham's first away win in nine Premier League games was their first at White Hart Lane since 1999 and lifts them to 13th in the table. Meanwhile, Spurs' second defeat of the season ended a six-game unbeaten run and sees them drop to sixth.

It was more of a surprise given that Andre Villas-Boas's side had the joint-tightest defence in the league, having conceded only twice before this encounter.

But the day arguably belonged to Morrison, 20, who capped a confident and hard-working display with a goal that underlined a talent that many observers have spoken of in glowing terms.

The former Manchester United player was called into the England Under-21 squad last week and this performance showed that the youngster could perhaps now turn the corner after having questions asked of his temperament.

Before Morrison's move to East London in January 2012, then United boss Sir Alex Ferguson said: "He's got a great talent but it's how to deal with it that is important."

West Ham boss Sam Allardyce took the unusual step of naming no recognised strikers in his side, as Morrison rotated with Mohamed Diame as the furthest player forward, but it proved a masterstroke.

Morrison was the visitors' most potent player in the first half and they almost took the lead when he was tripped near the edge of the box.

Rather than take a shot, Mark Noble enterprisingly scooped the ball over the wall and Kevin Nolan volleyed just wide from an angle.

At the other end, Andros Townsend gave watching England manager Roy Hodgson something to think about ahead of the World Cup qualifiers with another performance of direct running and confident dribbling.

But, despite several decent crosses from the right, Defoe could not make contact on his first Premier League start of the season.

Despite their tight defence, Villas-Boas's side have only scored six goals in six games prior to this match and their frustrations in front of goal continued after the break when Jaaskelainen twice thwarted Defoe.

James Tomkins had a header well saved by Hugo Lloris from a corner, yet it was Tottenham who began to show the greater purpose and Reid's opener on 66 minutes came against the run of play.

Reid expertly headed Stewart Downing's corner towards goal only for it to be blocked by Nolan on the line. The ball bounced back to the Kiwi and he made no mistake with the rebound.

Vaz Te added a fortunate second soon after. The Portuguese was found by Noble and his tame shot hit Loris before bouncing back to him and in off his knee.

There was nothing lucky about Morrison's goal, though. He collected Diame's clever flick and ran with the ball before taking on Michael Dawson and signalling his talent with a wonderfully composed finish.