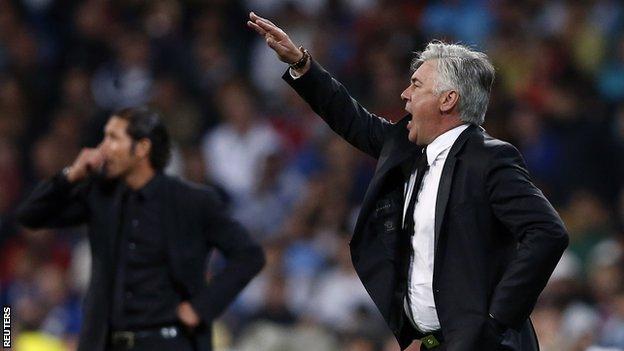 Real Madrid boss Carlo Ancelotti says his side are playing too slow a game after losing a Madrid derby for the first time in the league since 1999.

saw Atletico end a 23-match winless league streak against their city rivals, for whom Gareth Bale made his home debut.

"We suffered the same problem as in our last match," former Chelsea manager Ancelotti said.

"Our game is far too slow right from the beginning."

After the game, forward saying the team must take the blame.

"The manager has nothing to do with it. He is doing a great job. The fault is on the players, we are the ones that have to improve," he told Marca.

"I am happy with Ancelotti; he is one of the best coaches I have ever had."

Italian Ancelotti, who replaced Jose Mourinho in the summer, added: "By the time we get near our opponents' area, we don't have any spaces to find a positive solution.

"When you play like that against a side that are well organised at the back, it makes it much harder. The early goal complicated matters and affected our self-confidence. We didn't put in a good display in general, which is something we have to fix.

Real Madrid are third in La Liga, five points adrift of Barcelona and Atletico, who both have 100% records. They host FC Copenhagen in the Champions League on Wednesday.