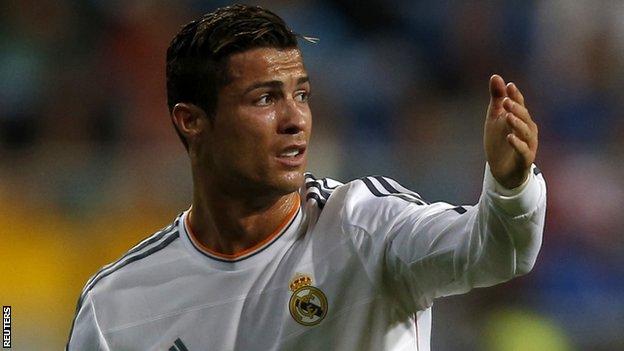 Cristiano Ronaldo has defended Real Madrid boss Carlo Ancelotti, saying the players have to be blamed for their 1-0 loss to Atletico.

Real are five points behind their city rivals and Barcelona, who have both won their first seven La Liga matches.

"The manager has nothing to do with it. He is doing a great job. The fault is on the players, we are the ones that have to improve," he told Marca.

"I am happy with Ancelotti; he is one of the best coaches I have ever had."

Diego Costa's eighth league goal of the season was enough to inflict a first defeat on Ancelotti, who was appointed manager at the Bernabeu in the summer.

The match saw world-record signing Gareth Bale introduced at half-time for his home Real debut but he was unable to make an impact as Atletico ended their 23-match winless streak against their rivals with a 1-0 victory.

Real had also dropped points earlier this month in a 2-2 draw with Villarreal, Bale's first game for the club, leaving them five points off the top of La Liga.

"We have to keep our heads up because the league is complicated," said Portuguese forward Ronaldo, 28.

"The good thing is that this loss has come early. I have a lot of hope for winning something important this year. I played poorly and so did my team-mates."

Meanwhile, Atletico manager Diego Simeone has urged his players not to get carried away by their perfect start to the season.

The former Argentina international midfielder, 43, said: "In a season, Barca and Real's financial and individual strength is bigger, we have to use our weapons and take it game by game.

"We have to keep calm, the season is very long, we cannot be over-confident."