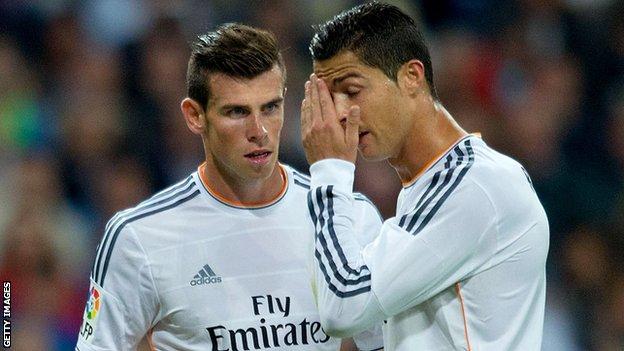 Gareth Bale's Real Madrid home debut ended in a 1-0 defeat by Atletico Madrid as the visitors maintained their winning start to the season.

Bale made little impact as he waits for his first league win in Real colours.

The defeat was Madrid's first loss at home since December 2011.

Bale made a goalscoring debut in the 2-2 draw with Villarreal, the only match Real had not won in the league this season prior to their latest loss.

His other game was as a substitute in the 6-1 win over Galatasaray, but he has missed the last two games with a thigh injury, and was unable to help his new side overturn Atletico's advantage.

Brazil striker Costa, who was a target for Liverpool in the summer, scored his seventh goal in eight games as he slotted past goalkeeper Diego Lopez from Koke's through ball to open the scoring.

Atletico should have been further ahead before the break, going close through Costa and Tiago, with Real Madrid struggling to break their visitors down.

In a frenetic derby, both sides created chances after half-time, but it was the visitors again going closest with both Tiago and Koke hitting the woodwork.

Substitute Alvaro Morata almost levelled for Real Madrid out of nothing but his acrobatic volley from 12 yards out was saved by Thibaut Courtois as Atletico held on to a deserved victory.