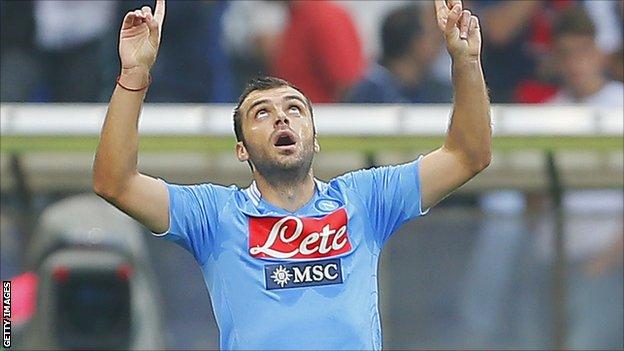 A brace of goals from Goran Pandev saw Napoli ease to victory at Genoa to move top of Italy's Serie A on Saturday.

The Macedonia striker nabbed his first in the 14th, latching onto a poor pass from Juraj Kucka, racing forward and firing into the bottom right corner.

Pandev doubled his tally after Lorenzo Insigne lifted a ball into the area for Pandev to smash across the keeper.

It was Genoa's fourth defeat in six games and their worst start to a season in 30 years.

The result leaves Sampdoria still without a win in the league and entrenched in the bottom three.

Roma, who have won their first five games, host Bologna on Sunday.

The other two unbeaten teams, Juventus and Inter Milan, are both in action on Sunday.

Juventus are at neighbours Torino and Inter Milan visit Cagliari.