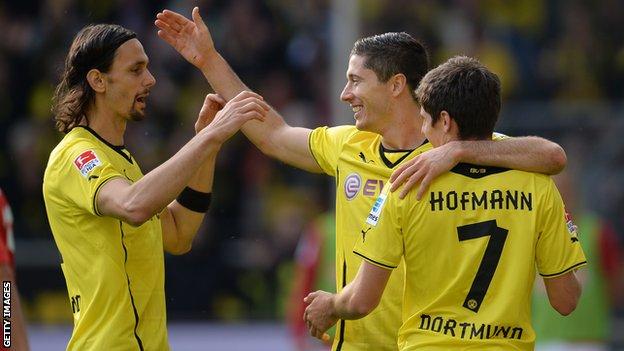 Borussia Dortmund and Bayern Munich maintained their unbeaten start to the Bundesliga season with wins on Saturday.

Bayern edged Wolfsburg 1-0 thanks to Thomas Muller's goal to put them on 19 points from seven games.

Sami Hyypia's Bayer Leverkusen are just one point behind after beating fourth-placed Hannover 2-0.

For leaders Dortmund it was a welcome result after Poland striker Lewandowski, widely expected to join Bayern Munich, - if not before then.

Marco Reus scored two of their others with Jakub Blaszczykowski also notching. Freiburg played the entire second half with 10 men following midfielder Fallou Diagne's red card in the 45th minute for conceding a penalty, which Reus scored.

Leverkusen, in their second season under ex-Liverpool defender Hyypia, are enjoying their best ever start to a season, with six wins and one defeat from seven games.

Struggling Hamburg started life under new coach Bert van Marwijk with a 2-2 draw away to Eintracht Frankurt thanks to Marcell Jansen's late equaliser.

Van Marwijk, who took the Netherlands to the 2010 World Cup final, replaced sacked manager Thorsten Fink during the week.

In Saturday's other games, Hoffenheim rallied from 3-1 down to draw 3-3 with Schalke, while Hertha Berlin also came from behind to beat Mainz 3-1.