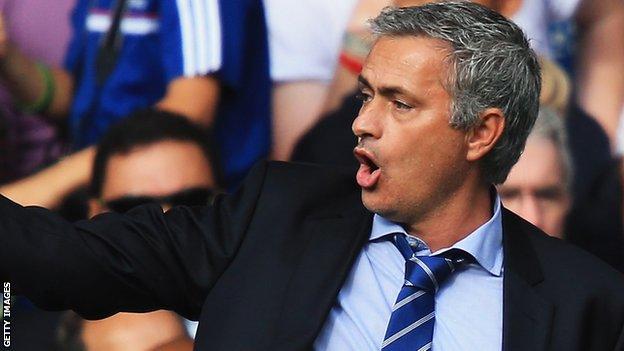 Chelsea manager Jose Mourinho believes Tottenham are a "big contender" for the Premier League title, claiming they are one of six possible champions.

The Portuguese, 50, insists the title race is more open than during his first spell as Blues boss between 2004-2007.

"Tottenham are a big contender. They have bought players with quality," he said ahead of Saturday's trip to Spurs.

"Six teams are competing for the position. Any one of the six teams can be first, any one can be sixth."

Mourinho joined Chelsea in June 2004 and led them to two Premier League titles in his first two seasons, with Manchester United lifting the trophy in his final season at Stamford Bridge.

Chelsea and Manchester United were the only Premier League winners between 2005-2011, before Manchester City broke their dominance in 2012.

Mourinho's side go into Saturday's match, which kicks off at 12:45 BST, fourth in the table, two points behind second-placed Tottenham.

"In my first time it was a clear race between Chelsea and Manchester United, two fantastic teams who were probably better than any team at this moment," he said.

"Finally, Man City broke that period of blue and red dominance. At the moment the situation is different.

"At this moment six teams are competing for the position, that is the beauty of the league. It is better like this."