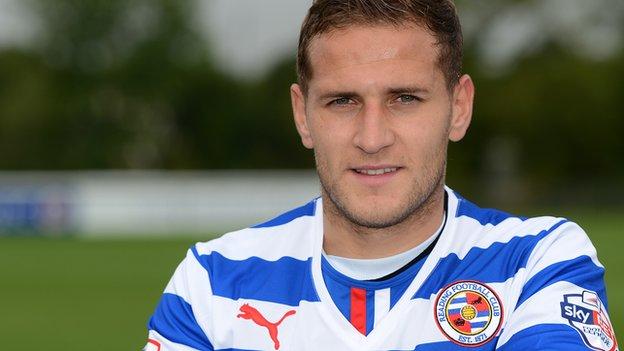 Billy Sharp says he has joined Reading on loan from Southampton in a bid to get his career back on track.

Sharp, 27, has not played since 4 May when he was at loan at Nottingham Forest from Premier League Saints.

With the arrival of Dani Osvaldo at St Mary's, Sharp had become surplus to requirements but has now sealed a move.

"Finally it's done and hopefully I can get my career back on track and help Reading climb the table," the striker told BBC Radio Berkshire.

Sharp arrived at St Mary's for £1.8m from Doncaster in January 2012, but spent much of last season on loan at Nottingham Forest after helping the Saints get promoted to Premier League.

The striker had several options available to him but has chosen to join Championship side Reading until January - where he will be reunited with his former Saints manager Nigel Adkins.

"There were a few clubs interested," said Sharp. "But I thought this was a brilliant opportunity to hopefully do well at a really good club. I'm raring to go and can't wait to get started.

"I'm here now to do well for Reading. I'll work hard and hopefully I can be successful.

Sharp fell out of favour at Southampton under Adkins's tenure, but the former Doncaster striker says he does not feel he has anything to prove to Adkins or anyone at St Mary's.

"I don't have anything to prove to anyone," said Sharp. "I just want to prove to myself that I can score goals. If I can do that, once the first goes in, I'm sure many more will follow.

"Goals win games, and hopefully I can be another cog in the squad and score a lot of goals until January.

"I feel I am someone who gets goal and who likes to play on the shoulder of the last man."