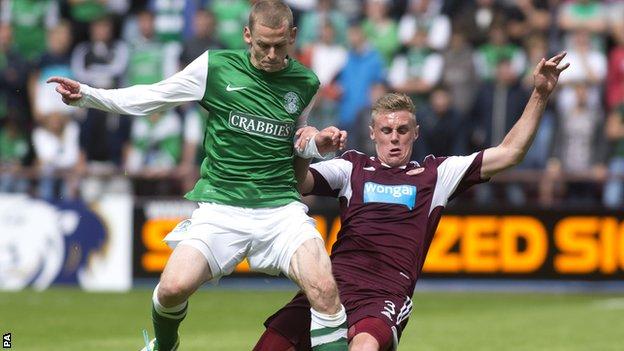 Hibernian have been drawn to face Edinburgh rivals Hearts in the quarter-finals of the Scottish League Cup.

The Edinburgh derby will be played at Easter Road on 29 or 30 October, with Premiership leaders Inverness CT to take on Dundee United.

Championship outfit Morton, who knocked out Celtic in the previous round, will entertain St Johnstone.

Motherwell will take on Premiership rivals Aberdeen, who thumped Falkirk in the fourth round.

It's a massive game for our club and good financially

"The boys are very positive about it; we lost narrowly to Hearts earlier in the season but we're a more settled side now," he said.

Callum Paterson headed the only goal of the game in last month's Edinburgh derby at Tynecastle, but Williams is expecting an improved Hibs display.

"We've got a lot more confidence now and are playing a lot better. We didn't give a good account of ourselves in the last derby.

"All the boys are looking forward to it; it's massive for Edinburgh and massive for both clubs."

Hearts defender Kevin McHattie said he was "buzzing" about the cup tie, adding that Edinburgh derbies were fantastic occasions.

"Hopefully this will be a great game," he said. "Each game is a cup final for us just now; especially in the league, we've done well so far.

"It's a massive game for our club and good financially. The fans have been outstanding since administration and we can't thank them enough for their efforts."

Motherwell defender Stephen McManus is relishing the prospect of facing Aberdeen at Fir Park for a place in the last four.

"If you can win a cup here, it would be a massive achievement," he said. "The last time they won one was 1991. So that would be brilliant.

"But we are just coming to work every day and listening to what the manager is telling us."