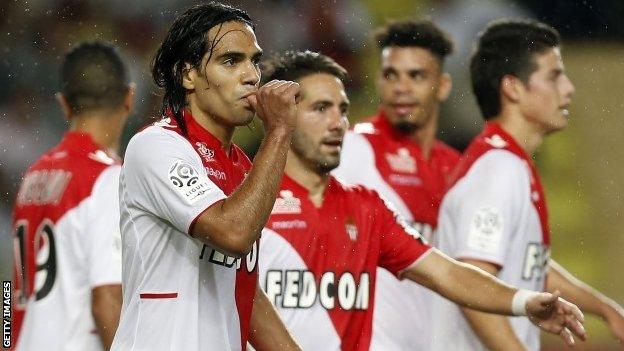 Radamel Falcao heads the table of Ligue 1 scorers with seven goals after netting twice to help leaders Monaco record a 3-0 win over Bastia.

Emmanuel Riviere gave Claudio Ranieri's side the lead before Falcao, 27, who joined the club in the summer for a reported £50m, added two more with low shots from inside the area.

"It's a very good start to the season," said Ranieri.

"The results give us tranquillity, confidence and calmness."

Paris St-Germain, who drew 1-1 with Monaco on Sunday, beat Valenciennes 1-0 thanks to a first-half stoppage-time goal from £55m-signing Edinson Cavani.

The former Napoli striker was fed a pass by Swedish forward Zlatan Ibrahimovic before firing in an angled drive from eight yards.

Monaco have 17 points from seven games, two points ahead of PSG, with Marseille a point behind in third place and Lille fourth on 13 points.