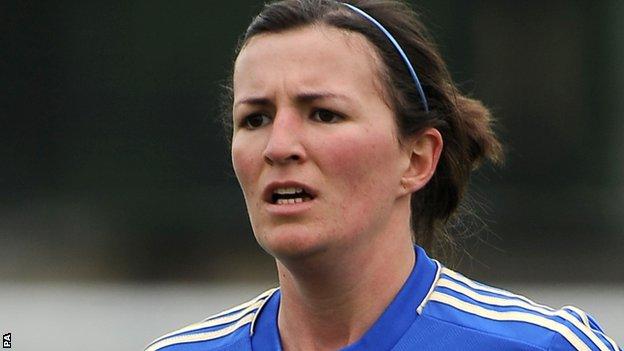 Striker Helen Ward celebrated her 50th cap by scoring the only goal for Wales Women in their opening 2015 World Cup qualifier against Belarus.

It was the Chelsea forward's 30th goal for her country as Wales launched their campaign in Group Six.

Wales play England in their next qualifier in London on 26 October.

Belarus did manage to put the ball in the back of the net in the second half but Anna Pilipenko was ruled to have used her hand and was shown the yellow card by Hungarian referee Eszter Urban.

The home side dominated proceedings but Ward, captain Jess Fishlock and teenager Nicola Cousins were all denied by goalkeeper Botyanovskaya, who produced a string of important saves, as the hosts struggled to take their chances.

Belarus had their two best chances of the game at the start of the second period. Midfielder Anastasia Linnik had her shot saved by Nicola Davies before the Wales goalkeeper kept out visiting captain Oksana Shpak's free-kick.

Belarus then had Svetlana Astashova yellow carded for an unprovoked kick on Wales' Sophie Ingle.

The Belarus midfielder was lucky to stay on the pitch but Wales finally saw their persistence pay off when Ward beat a defender and and fired a shot home in the 81st minute.

Wales now face Group Six favourites England, who followed up their opening 6-0 win over Belarus with an 8-0 win over Turkey at the same time as Wales were squeezing past Belarus.

Ukraine and Montenegro complete the pool.

The winners of all seven groups will advance directly to Canada 2015, while the four runners-ups with the best record against the sides that finish first, third, fourth and fifth in their groups will face play-off matches in October and November 2014 for the remaining berth.