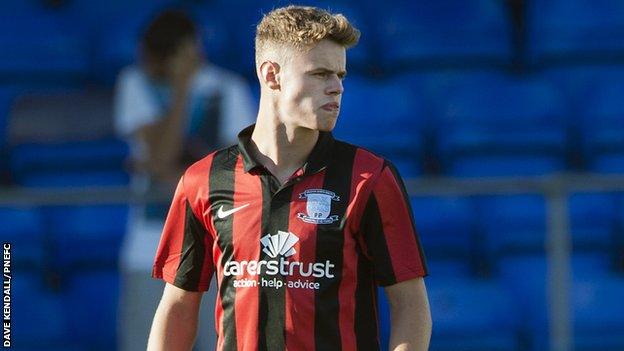 Preston have signed full-back Alex Nicholson on a short-term deal after freeing up funds by allowing other players to go out on loan.

and have left for Colchester and Burton respectively on a temporary basis this month.

It has allowed boss Simon Grayson to sign 19-year-old Nicholson.

"He's a young lad who we like the look of," Grayson said of the former Newcastle United defender.

"He trained with us a little bit last year and he's been with us all through pre-season," the ex-Huddersfield boss told BBC Radio Lancashire.

"One or two going out has released some funds for us to sign Alex on a full-time basis.

"Hopefully he'll develop into a good footballer and be part of the Preston squad for a long time to come."

Cansdell-Sherriff, who has not appeared for North End this season, left Deepdale for Burton on Wednesday.

"It was another situation where a player wasn't involved too much because the first team are doing so well," added Grayson.

"He's an experienced player who needs first-team football, so we've given him the opportunity to go out. It suited us and it was certainly something that Shane wanted to do."