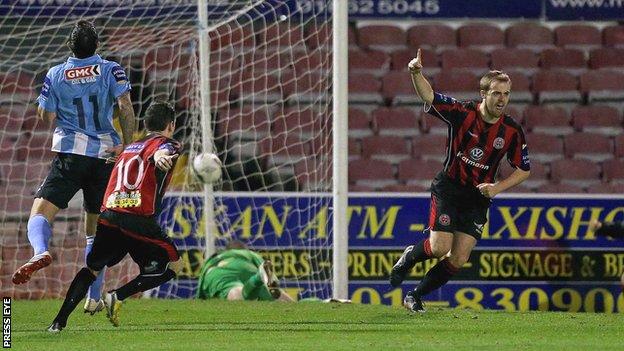 Derry's hopes of securing a Europa League place suffered a blow after this defeat by the Bohs at Dalymount Park.

Ryan McEvoy netted the opener from a fourth-minute penalty after David McDaid brought down Stephen Traynor.

McEvoy added the second on 22 minutes with a header from Keith Buckley's cross before Rory Patterson fired wide for the Candystripes.

Derry defender Ryan McBride was shown a straight red card for a last-man foul on Dinny Corcoran after 69 minutes.

The Candystripes were aiming for their first back-to-back wins in the league since June but that was an uphill task after the Bohs struck early in Dublin.

McEvoy put the lowly Bohs, sitting 10th in the Premier Division, in front from the penalty spot and the hosts were in control after the midfielder's header made it 2-0.

Patterson was off-target with his shot before the break while McBride and Michael Duffy also went close for City.

McBride's dismissal all but ended Derry's hopes of a comeback and Bohemians eased to a crucial victory in their battle against relegation.

Derry remain fourth but Shamrock Rovers are now just three points behind after a 3-1 win over Drogheda United.