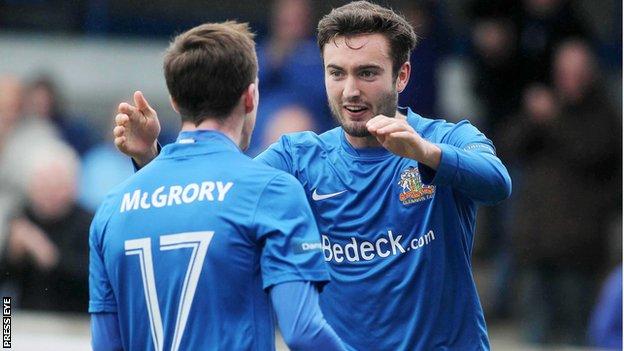 Linfield manager David Jeffrey insists it is not a big shock to see Glenavon and Portadown occupying the top two places in the Irish Premiership table.

The Mid-Ulster clubs finished in the bottom half last season but have started in impressive style this term.

"If you look at the quality of the players they both brought in, it is not surprising," said Jeffrey.

"The surprising thing is the way they underachieved last season. They deserve to be at the top on current form."

Linfield, after a stuttering start, have jumped up to fourth in the Premiership standings.

But four wins in a row have left Jeffrey's men now just one point behind Tommy Breslin's Reds who have lost three out of five in the league.

Jeffrey, though, continues to point out that a massive team rebuilding project has been taking place at Linfield.

"We are a work in progress, that is a simple fact. Eleven players left the club and we brought nine in," he added.

Linfield are at home to Coleraine in the Premiership this Saturday followed by a mouth-watering trip to Glenavon.