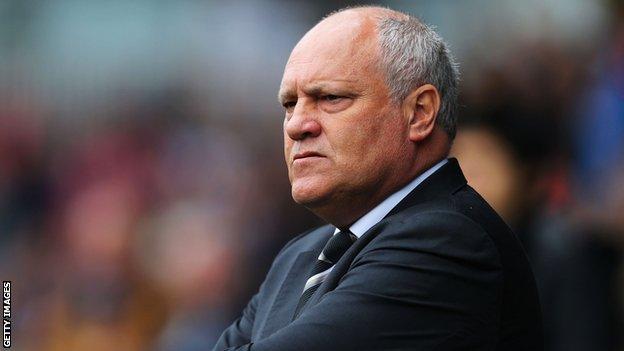 Fulham boss Martin Jol says Tuesday's Capital One Cup win over Everton has convinced him his side will improve.

The Cottagers have not won a Premier League game since the opening day of the season and have only scored three league goals.

He told BBC London 94.9: "I thought at the start of the season we did not have enough goals in us.

"This game showed me, with Darren Bent and Dimitar Berbatov on the scoresheet, that we have got enough quality."

He added: "The league is more important but I always want to do something in the cup.

"Maybe we gained some confidence but we need to keep working hard on the training pitch and then the results will come."

Since beating Sunderland, the west London side have lost to Arsenal, Newcastle and Chelsea and drawn against West Brom.

"If you don't score goals you are under pressure," said Jol. "That is what happened to us.

"If you look back at Newcastle, in the 85th minute Adel Taarabt could score, he didn't and they scored.

"Against West Brom it was the same kettle of fish. We were 1-0 up and the ball was in the net four times and then they scored from a corner kick.

"You have to score to win games and that is exactly what we did against Everton."

Jol says it will take time for the side to gel while summer signings such as Bent and Taarabt settle into life at Craven Cottage.

"I have to integrate Elsad Zverotic, Adel Taarabt and Darren Bent," the Dutchman said.

"It is not easy because two of them have not played a lot of matches. Training is different to playing matches.

"We need to find the right balance and hopefully our supporters realise if everyone is fit and available we will get back to winning ways.

"We have got some good quality players but it is not always easy to play Berbatov with Bent and Adel Taarabt.

"We have young players like [Pajtim] Kasami and [Alex] Kacaniklic who will be big players in the future but they are still young."