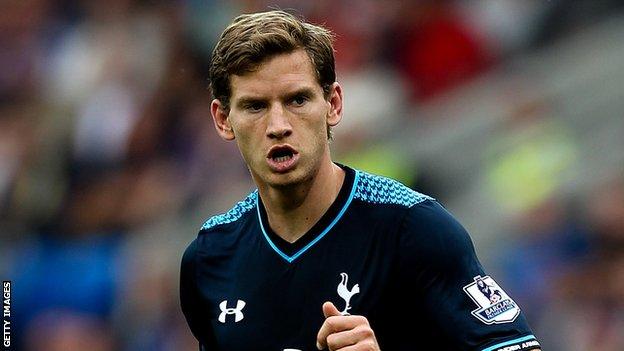 Tottenham defender Jan Vertonghen thinks other sides are taking notice of their strong start to the season.

Spurs sit second in the Premier League table and have only conceded one goal in their five league games.

The 26-year-old told BBC London 94.9: "We have a lot of confidence. I think everybody can see we don't concede a lot of goals.

"We score a lot of goals now and have a big squad. I think other teams are watching."

Tottenham are only behind Premier League leaders Arsenal on goal difference.

The north London club welcome Chelsea to White Hart Lane on Saturday and the Belgium international is wary it is another big test game for his side,

"We lost to a direct opponent the other week against Arsenal and we want to do better this time," he said.

"Last year we lost at home [against Chelsea] because of quite a lot of injuries in my opinion. We want to do better this year."

Spurs progressed to the fourth round of the Capital One Cup with a 4-0 win over Aston Villa on Tuesday.

It was their third game in six days following their Europa League tie against Tromso on Thursday and their 1-0 win at Cardiff on Sunday.

Vertonghen admitted to some tiredness after the victory at Villa Park but says the size of their squad should help them handle matches in quick succession.

"It was unbelievable," Vertonghen said. "I have never played two games in three days. It was quite a test and I am very tired at the moment.

"We can be happy. Last year we were kicked out of this tournament in the second round and we wanted to better that this year.

"It is tough but we already need everybody. We have five or six people who are injured and couldn't play.

"Some players didn't even travel and quite a lot of them will play on Saturday.

"I think we needed this big squad, for sure."