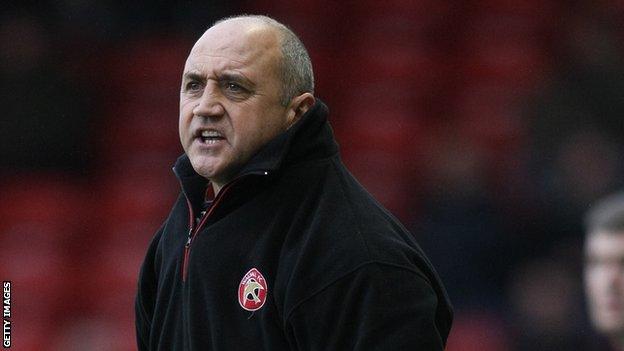 Cambridge United boss Richard Money has insisted his Conference Premier leaders are focused on accumulating points and not their position in the table.

The unbeaten U's opened up a four-point gap at the top by beating second-placed Nuneaton 3-0 on Tuesday.

"We're on the relentless pursuit of points. That's what we've been saying for a number of weeks.

"We'll let everybody else think about what is going to happen in the future," Money told BBC Radio Cambridgeshire.

"We'll focus on recovering and a fifth game in 15 days [against Wrexham on Saturday]."

After taking the lead through Luke Berry in the first half, Cambridge had to endure heavy pressure from Nuneaton, particularly either side of the break, but a first goal for the club from Kwesi Appiah and a Harrison Dunk strike ensured the win.

It was also United's seventh clean sheet of the campaign.

"In the end it's turned out to be reasonably comfortable, but it certainly wasn't for a long period," added Money.

"I don't think we were very good first half and it's always a two-way thing in the dressing room.

"We the staff let them have their say and nine times out of 10 they've said it all. Sometimes you've got to reinforce it a little bit more.

"There were a few harsh words said at half-time, but second half I thought we played really well and the three substitutes had a really good effect on the game."