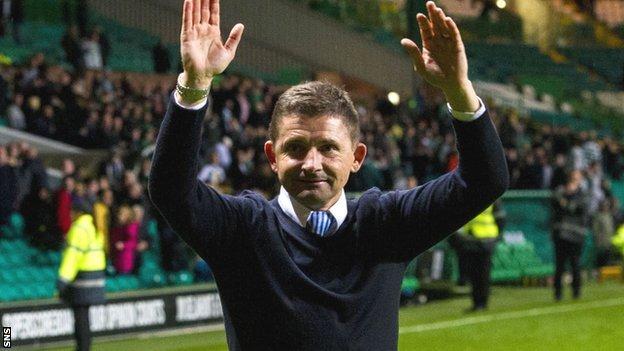 Morton manager Allan Moore said "desire and work-rate" were the reasons his Championship strugglers were able to overcome Celtic to reach the Scottish League Cup quarter-finals.

Dougie Imrie's extra-time penalty was enough to give Morton their first win at the Scottish champions since 1971.

"We said: 'If you swap a jersey, make sure it's full of sweat so they know you have put a shift in'," said Moore.

"There were a lot of jerseys in there full of sweat."

He added: "You need boys with desire and work-rate and they had it in abundance."

However, Moore did admit to being "flabbergasted" as his side, second bottom in the Championship, pulled off a stunning victory.

The breakthrough came when Efe Ambrose handled the ball in the box and Imrie calmly scored from the penalty spot midway through the first period of extra time.

Celtic then laid siege to the visitors' goal but could find no way past the Greenock side's goalkeeper Nicolas Caraux.

"It's easy to criticise the players and we did everything but score tonight," Lennon told BBC Scotland.

"We had 26 corners, hit the post and had one cleared off the line. I've got to give credit to Morton who defended heroically at times.

"Did we do enough to win the game? Yes, but we didn't take our chances so, congratulations to Morton."

Moore agreed with the defensive performance of his side.

"We defended brilliantly," he said. "We rode our luck in extra time but the fact they stuck a centre-half [Virgil van Dijk] up front was testament to how well the team played.

"We knew we'd need to batten down the hatches and throw our bodies in front of things. Our goalkeeper didn't have any outstanding saves to make."

Although reluctant to pick a man of the match, Moore highlighted the contribution made by Slovakian defender Tomas Peciar and French midfielder Fouad Bachirou.

"Some of the headers Peciar won, in his first full game for us, towards the end were magnificent," he said.

"Freddy [Bachirou] can step up. He has been outstanding in our league games. No disrespect, but playing in a better team in a higher league would bring him on leaps and bounds."

Moore praised the Cappielow chairman Douglas Rae for his patience while the team has struggled this season and said he hoped the League Cup result would "be the catalyst for picking up points" in the league.

"I hope we can keep these standards up and push on in the league because that is our bread and butter," he added.