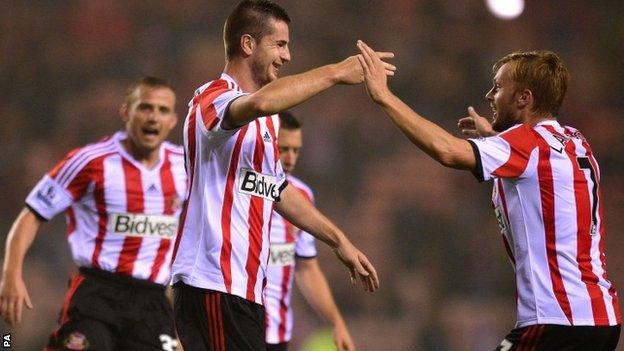 Sunderland's caretaker boss Kevin Ball has said he would like to be considered as a permanent successor to the recently sacked Paolo Di Canio.

Ball guided the Black Cats into the fourth round of the League Cup with a 2-0 win over Peterborough on Tuesday.

"Anybody who is anybody would like to be considered for it," said Ball.

Sunderland are bottom of the Premier League and are searching for a new manager after a player revolt led to Di Canio's dismissal on Sunday.

Ball was in charge of Sunderland for 10 games following Mick McCarthy's departure in 2006.

He added: "In the sense of what I have done as a coach or a player and, not only that, the qualifications I have got as a coach, I would like to be considered.

"But ultimately that's the club's decision and I would go with that. Whether it was me or someone else, they would have my full support."

Kevin Ball had a previous stint as Sunderland caretaker manager in the aftermath of Mick McCarthy's sacking in March 2006. Ball won just one of his 10 games in charge. The Black Cats were relegated with 15 points, 24 from safety.

Tony Pulis, Steve McClaren and Gianfranco Zola have also been linked with the vacant post.

Sunderland's players approached the club's chief executive Margaret Byrne to complain about Di Canio before his sacking, but Ball praised his players' attitude as they secured only a second victory of the season.

Emanuele Giaccherini, one of Di Canio's summer signings, and Valentin Roberge scored to maintain the Black Cats' interest in the competition.

"I just thought it was a really good performance in the sense that they worked very hard, but also played some good football and created a lot of chances," said Ball.

"We also have to give credit to Peterborough because they came up with a decent game-plan. You can see why they are doing very well at the moment."