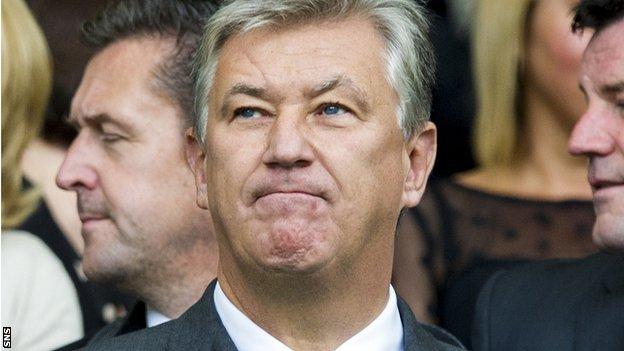 Chief executive Peter Lawwell has emphasised the need for Celtic to continue qualifying for the group stage of the Champions League.

Celtic this week announced pre-tax profits of £9.74m in their annual accounts, due largely to participation in Europe's top club tournament.

"When we play in the Europa League, we have to realise money from player sales to balance the books," said Lawwell.

"When you get the Champions League, that takes you beyond that."

Neil Lennon's side reached the round of 16 in last season's Champions League after the club missed out on the group stages of the competition in the previous three seasons.

"It was a great year for us, clearly with the Champions League participation in the group stage and then through to the last 16 and also the profit - we sold Ki Sung-Yueng in that year as well," Lawwell told BBC Radio Scotland's Sportsound.

"Very satisfying and it really puts is in a good position, pretty stable financial position to face the challenges that we undoubtedly will face in Scottish football going forward.

"A club like Celtic, we feel we should be in the Champions League most years, not only for the finances but clearly the profile and exposure it gives the club and also not just for the club but for our players.

"I think some of the fees that we realised in the summer [by selling Gary Hooper and Victor Wanyama] were probably down to the fact that our players played and played exceptionally well in the Champions League.

"When you see the results for last year, you can see how dependent we are on the Champions League.

"The way we plan, we always plan for the Europa League and playing in the SPL at the moment where mature revenue streams are on the decline really, we don't have Rangers and we've taken a commercial hit in that.

"It's becoming much more critical that we sell a player if we're in the Europa League, based on the cost base that we have here at the club. That's the strategy, Neil is perfectly happy with that."

Celtic signed midfielder Nir Biton and striker Teemu Pukki after reaching this season's Champions League group phase but Lennon had tried to capture the latter from Schalke for the qualifying play-off tie against Shakhter Karagandy.

Lawwell says he could "understand" any frustration his manager may have had during the summer transfer window.

"Throughout the whole window, we knew what we wanted and we went out to try and get them," he explained.

"It's not a straight forward process. Some players didn't want to come.

"There were other circumstances like Pukki where [Klass-Jan] Huntelaar took an injury, that made [Schalke] think twice about selling him and ultimately they made the decision to sell but it was after the Karagandy game.

"There's a wide range of variables that are involved in buying and selling players. We go in with the best of intents to deliver. I think ultimately we did deliver but we just didn't get it before that qualifying game."

The chief executive is hopeful of extending the contracts of midfielder Joe Ledley and striker Anthony Stokes, who will be out of contract next summer, and believes Celtic can also retain Lennon even if he attracts suitors.

"Neil, is in my view, perfectly happy to be here at the time being," added Lawwell. "He loves the club, he loves his job, he's doing extremely well and we're in the Champions League.

"Inevitably, he will be courted at some point but hopefully we'll be keep a hold of him."