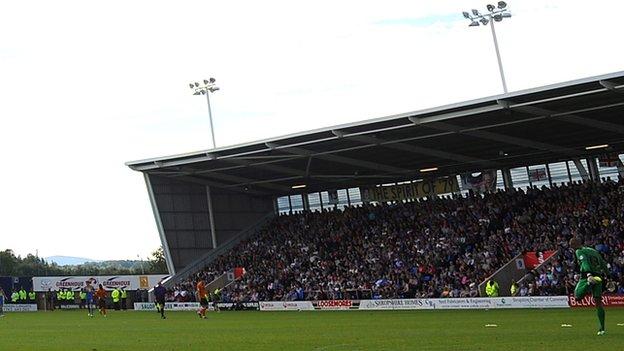 Shrewsbury Town have been handed their highest international honour to date by being asked to stage the England Under-21 European Championship qualifier against San Marino on 19 November.

Since the Greenhous Meadow opened in 2007, Town have staged matches both at under-19 and under-20 level.

Shrewsbury's neighbours AFC Telford have also been chosen to stage a game.

The Bucks Head will be one of the four host venues for the Uefa European Women's Under-17 Championship finals.

That competition takes place in England from 26 November to 8 December.

Telford will stage the opening ceremony before hosts England get the 16-match, eight-team tournament under way on 26 November at 12:30 BST.

Shrewsbury were named, along with Chesterfield, Derby County, Nottingham Forest and Notts County, as one of five host venues - apart from Wembley - for England's ultimately unsuccessful bid to host the 2013 European Under-21 finals.

"I've been speaking to the FA for the last few months," said Town secretary Jayne Bebb. "And to have been selected for an under-21 qualifier is a real coup."

The League One club moved to the 9,875 capacity stadium in 2007 after selling Gay Meadow, their home of 97 years on the banks of the River Severn, for development.

A new record stadium crowd was set only last Saturday when Shrewsbury lost 1-0 at home to neighbours Wolves in front of 9,510.