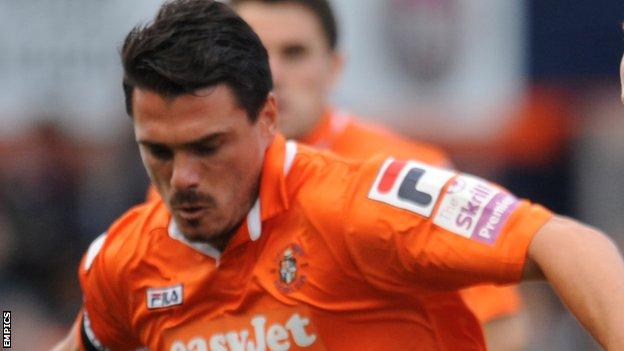 Luton Town boss John Still has said captain Ronnie Henry was standing up for his team-mates when engaging in a verbal dispute with a supporter.

Henry, angered by comments made at half-time when the Hatters were 1-0 down to Lincoln on Saturday, confronted the fan after

"I think Ronnie Henry stood up for his team-mates. I applaud him for that.

"I'm not 100% sure that he's done it in the right way. But I support him," Still told BBC Three Counties Radio.

Luton in the Conference Premier

"Sometimes you have to stand up to what in effect can sometimes be classed as bullying.

"When people can't respond to something, I think that is classed as a form of bullying."

Luton, in the Championship as recently as 2007, are in their fifth successive season in non-league football, a fact that frustrates a large proportion of the expectant Hatters contingent.

"A fan at half-time decided to take it onboard and try and come to the tunnel at me," Henry told the club website.

"He said a few words to myself about me and the rest of my team-mates, and I've been taking it for too long now to keep taking it.

"So I decided to speak to him at the end, asked him for a chat, and he hid.

"And then he clapped, so I told him don't clap. If you're not going to be behind us, don't come."