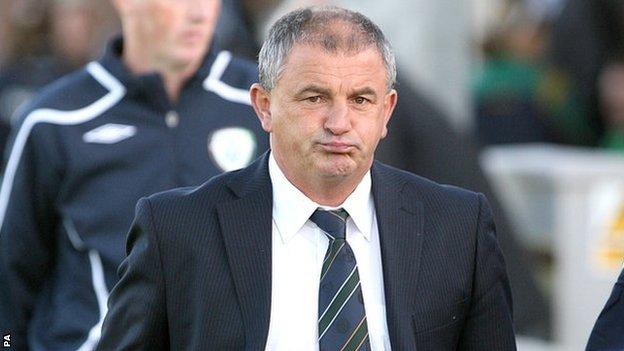 Republic of Ireland have named Noel King as their interim manager following the departure of Giovanni Trapattoni.

Under-21 boss King was asked to step up as the Football Association of Ireland considers its options.

Trapattoni, 74, left by mutual consent after defeats by Sweden and Austria earlier this month which effectively ended their World Cup hopes.

King is now likely to take charge of the final two qualifiers, against Germany and Kazakhstan, next month.

After spells managing several League of Ireland sides, Noel King was the Republic of Ireland women's manager from 2000 until 2010, when he took over as men's Under-21 boss

It was concluded at a board meeting that the FAI would carry out a comprehensive assessment.

A statement read: "It was agreed at the meeting that former international Ray Houghton, who was involved in the last managerial appointment process, and Ruud Dokter, the FAI's newly-appointed high performance director, should carry out this on-going assessment and report for the board.

"The board resolved that it will take the appropriate time to appoint the best person to manage Ireland for the Euro 2016 campaign, which starts in September next year."

King's assistant Harry McCue will take charge of the Under-21s for next month's double header against Romania.

Trapattoni had guided the Republic to the Euro 2012 finals, but his five-year reign came to an end after a 1-0 defeat by Austria left the Republic fourth in Group C.

Former Republic manager Mick McCarthy and ex-Sunderland boss Martin O'Neill have been linked with the job, though McCarthy has said O'Neill is favourite to succeed Trapattoni on a permanent basis.