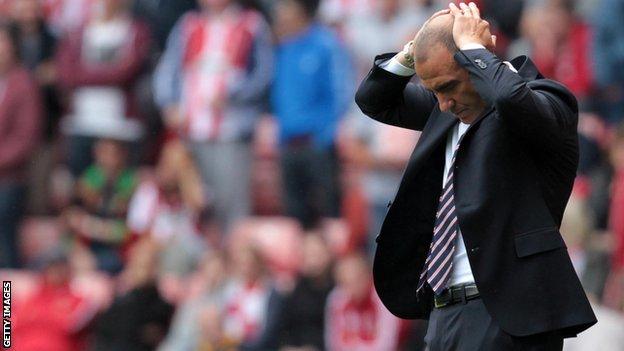 "Now from Sunderland's point of view there is going to be real pressure on the owner, Ellis Short, to get it right for the club in the long term.

"Roberto Di Matteo is favourite with the bookmakers with Kevin Ball as caretaker boss ahead of the Peterborough game on Tuesday but Sunderland are not going to rush into an appointment. They believe at the moment Kevin Ball is a safe pair of hands.

"I think Ellis Short needs to get this right for the long term as Sunderland need stability."

Afterwards senior players told Byrne that the situation had become untenable because of the Italian's "brutal and vitriolic" criticism of the squad.

The Black Cats have only one point from five Premier League games this season.

Development coach Kevin Ball has taken caretaker charge of the first team and led training on Monday ahead of Tuesday's League Cup tie against Peterborough.

Ball, who took over in 2006 for 10 games following Mick McCarthy's departure, is ready for his second stint.

"I enjoyed it last time and I hope I feel the same way about this one as well," he said.

"It is sometimes a natural progression to be able to do all of those things, so I was quite comfortable with it."

Di Canio won only three of his 13 matches after replacing Martin O'Neill in March and took one point from five top-flight games this campaign.

The former Swindon boss immediately attracted controversy following his appointment, partly because of a fascist-style salute he made while playing for Lazio in 2005.

But he guided Sunderland to Premier League safety and led the team to a famous 3-0 win over Newcastle to earn valuable points in the fight against relegation.

However, public criticism of his squad at the end of last season was followed by bans on mobile phones, tomato ketchup, mayonnaise and ice in Coca-Cola at the club's training ground.

After Saturday's loss to West Brom, Di Canio was verbally abused by travelling supporters and further criticism of his players led to anger among the squad.

Ball now has the challenge of galvanising the squad ahead of the third-round tie but he has told them that their form this season has not been good enough.

Sunderland's only win of the season was the 4-2 victory over MK Dons in the previous round.

"Because of the events of the last day or whatever, there's not a great deal of stuff you could have put into their minds ready for Tuesday night.

"We didn't particularly talk about the game, but after training we mentioned it and just said about the importance of it and what we were doing."