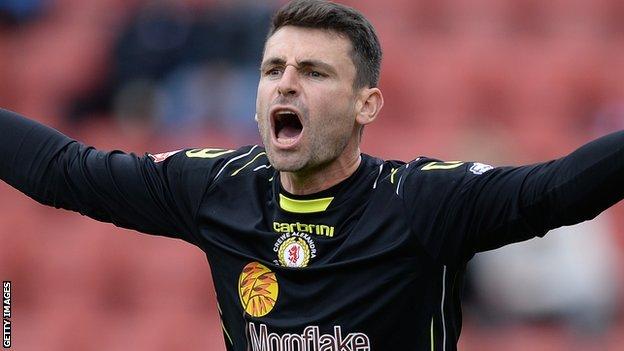 Crewe Alexandra veteran goalkeeper Steve Phillips says he is still as keen as ever to be a winner after clocking up the 600th game of his career.

And, having completed his 100th league game for Crewe in Saturday's 1-1 draw at Oldham, he maintains that the only secret formula to succeed is hard work.

Phillips' tale of the tape

"What it takes is complete, utter hard work and understanding the technique of how to play in goal."

Phillips insists that the same principles apply to the young keepers he now finds himself coaching at the Academy club's state-of-the art Reaseheath training ground.

"The basic technical aspects of keeping goal are very hard to absorb," he said. "But you've got to master it if you're going to make it."

"I'm always here when I don't have to be here. I go above and beyond the call of duty in the search to find that little gem, to try and help the club progress and make some money."

Bath-born Phillips has seen life at all the top levels of English football except the Premier League since making his Bristol City debut in December 1998.

After being relegated from the second tier in his first season with City, he was a Football League Trophy-winner at the Millennium Stadium in 2003, failing to make it back there for two finals in one season when they lost to Cardiff in the League One play-off semis.

He was then part of the City side beaten by Brighton in the League One play-off final at Cardiff the following season before enjoying more luck when English football's big stage returned to Wembley, making the first of three successful visits with their local rivals Bristol Rovers in 2007.

He then won there again with Crewe in the 2012 League Two play-off final before picking up a third Wembley winners' medal with the Alex in April 2013 - in the Johnstone's Paint Trophy final.

"To play 600 games is a great achievement," Crewe boss Steve Davis told BBC Radio Stoke. "Steve can be pleased he has been able to play that amount of games at a decent level.

"You always want to reach targets and Steve will have targeted 600 games over the past couple of seasons."