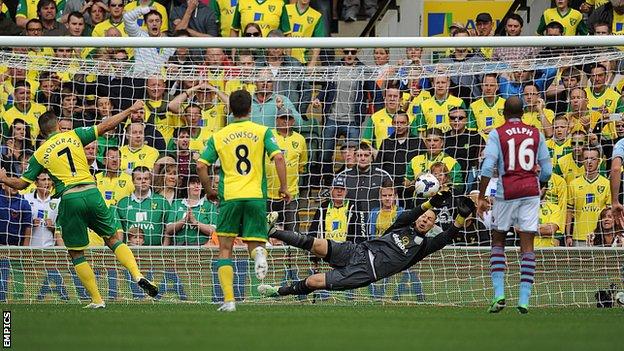 "We all know if the penalty is scored then we're not even talking about it," he told BBC Radio Norfolk.

Canaries on the spot

Last season, Norwich were awarded two penalties, scoring one and seeing one saved

"It's something we have spoke about and something we'll learn from. Ricky will take penalties."

With the game at 0-0, the Canaries were awarded a penalty for Ciaran Clark's handball and, after a discussion between Van Wolfswinkel and Snodgrass, it was the Scotland international who stepped up and saw his effort saved by Brad Guzan.

And Libor Kozak's strike on the half-hour mark was enough for Paul Lambert's side to take three points at Carrow Road.

"Sometimes you will have somebody who's very confident and you want confident players," Hughton said of Snodgrass's decision to take the penalty.

"You want players who appear to take opportunities, who thrust themselves forward."