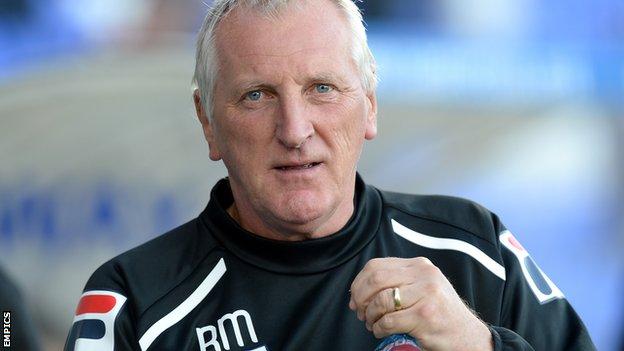 Manager Ronnie Moore believes Tranmere Rovers have lacked passion during a poor start to the League One season.

on Saturday - their fifth defeat in eight league outings - and have the joint-worst defensive record in the division, having conceded 19 times.

"There's certainly a great deal we can do about the passion for the first 25 minutes," he told BBC Radio Merseyside.

"It wasn't good enough and how many times have I said that?"

Tranmere were early pacesetters in League One last season but fell away alarmingly in the final third of the campaign, losing 12 of their final 17 games and eventually finishing 11th.

Tranmere's defensive frailties were evident again at Meadow Lane on Saturday, with Moore unhappy with his side's start to the match.

The 60-year-old continued: "They talk a good game in there. They're talking about coming out, doing the right things, chasing and closing down, but we can all do that. We can't go out and play for them.

"When they cross that white line, we put our faith in them to go out there and show a bit of desire.

"We can't make them have that. They should have that as a group, and the leaders on the park should be the ones pointing the finger and asking them to show a bit of passion."

Tranmere host Premier League side Stoke in a Capital One Cup third-round tie at Prenton Park on Wednesday.