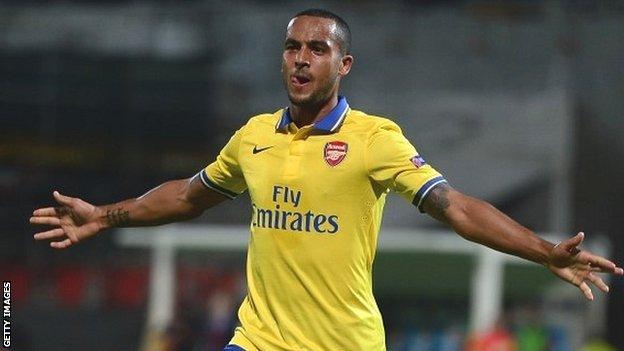 Arsenal boss Arsene Wenger hopes an injury to Theo Walcott, suffered before the win over Stoke, is not serious.

The Gunners completed a 3-1 victory with three set-piece goals to earn their seventh consecutive win.

But Walcott, 24, did not take part in the game despite initially being named on the team sheet.

"We hope we haven't lost Walcott for a long time. He has a muscular abdominal problem but I don't know how serious it is," Wenger told BBC Sport.

"Is it a question of days? I hope so. He had a little problem before the Marseille game and it became a bit worse.

"It is a bit mysterious because we don't really know what it is."

Walcott, who scored his first goal of the season in the 2-1 win over Marseille in the Champions League on Wednesday, was replaced by 18-year-old German Serge Gnabry against Stoke.

But Walcott has suffered from a similar injury before, having withdrawn from the England team earlier in 2013 and on that occasion was out for three weeks.

One of the Gunners' injured players, Mikel Arteta, returned to action on Sunday, coming on for the last 10 minutes against the Potters.

And Wenger said other absentees would return after the next international break with players back at their clubs on 16 October.

Arsenal face West Brom in the League Cup on Wednesday and Wenger said he would rest some of his key players after a busy opening schedule. That could mean a start for Danish striker Nicklas Bendtner, who made the bench on Sunday for the first time this season.

"I have to rotate [for the West Brom game] because we have many players on the fringe and I have to make some decisions," the manager said. "We have a game on Saturday and a game against Napoli [in the Champions League] after that so we will have to rotate."

Of his team's victory against Stoke, he admitted it was "unusual" to score from three set-pieces.

He added: "We have established a good run and overall, after a Champions League game, to win is very important. We did it with two different halves. The first was fluent, the second was down to desire and will. "