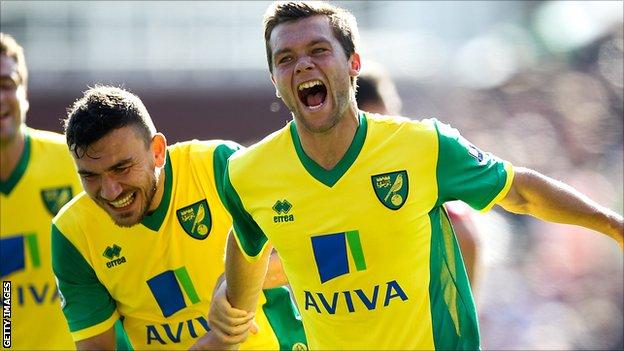 Howson found the net from 25 yards with a low strike in a game of few chances.

"Stoke never looked like they would score and these are three very good points for Norwich.

"Victory was deserved with Stoke just managing one shot on target."

The Canaries started brightly with Ryan Bennett crashing an effort off the crossbar before seeing his rebound saved by keeper Asmir Begovic.

Stoke managed just one attempt on target with Steven Nzonzi forcing Norwich keeper John Ruddy into a low save with his tame long-range effort.

Norwich started well, pressing Stoke high up the pitch, forcing them into sloppy errors, and they came close to breaking the deadlock through Bennett - whose prodded shot on the slide from Robert Snodgrass's corner crashed off the crossbar before Begovic saved the rebound.

The game faded away after a bright start, with Marc Wilson's booking for a reckless challenge on Ricky van Wolfswinkel the only incident of note in the rest of the opening half hour.

It took 32 minutes for Stoke to muster their first attempt on goal, with their erratic passing making it near impossible for them to mount any sustained pressure.

Marko Arnautovic, a transfer deadline day signing from Werder Bremen, went close for the hosts when he blazed a shot just wide of the angle, but moments later Stoke were behind.

Howson picked the ball up 25 yards out and his low strike dipped and swerved in front of Begovic who could not keep it out.

Stoke introduced Jermaine Pennant and Stephen Ireland at half-time in an attempt to liven up their attack, but it proved fruitless.

Kenwyne Jones claimed a penalty after he was dragged to the ground by Leroy Fer but his appeals were waved away.

At the other end, Anthony Pilkington cut inside but sliced his shot well wide, while on the other flank Snodgrass did likewise before curling his effort past the angle.

With 11 minutes remaining, Nzonzi finally forced Ruddy into a notable save, the Norwich stopper keeping out the Stoke's midfielder's tame effort from 25 yards.

Snodgrass came close to doubling Norwich's lead with a curling shot on the spin that was superbly kept out at full stretch by Begovic.

It was the last action of a lacklustre encounter as Norwich picked up their first away victory of the season and only their second away clean sheet in 42 Premier League matches.

Victory moves the Canaries above Stoke on goal difference into 14th in the Premier League table.

"This is a tough place to come. We had really good spells were we dominated possession.

"We coped with their threat, we had a bad result last week and we knew it was important to start well. We played with a high tempo and the players deserve everything.

"I've seen the incident and I think Kenwyne Jones makes a meal of it. There is a slight tug, and we're fortunate that something has gone our way.

"It's about picking up points and hopefully this will give us some confidence."

"We were below par today. This is a Premier League game and we need players to perform and we haven't.

"It's only today that they have let themselves down, it was a disappointing performance and we were poor.

"We never got any pace or power into our game which is unlike us.

"If the referee sees it, he will agree there is an infringement, Kenwyne was trying to get on the end of the ball, the letter of the law says it should be a penalty

"But we needed to be better today but they were comfortable when they got the goal and overall we were well below it."