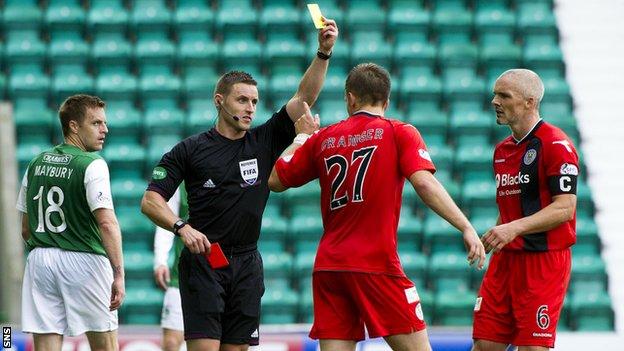 The Paisley club have picked up just one point in six league outings.

"I'm under a great deal of pressure," Lennon told BBC Radio Scotland. "I understand that. But as long as I'm in charge I'll be giving the best I can.

"I love this club to bits. I've given three years of my life to this and I want to continue. I don't want it taken away from me."

Lennon guided the Buddies to League Cup glory in March but they have picked up just one win in all competitions since then.

With St Mirren fans growing increasingly disgruntled, Lennon pointed to other examples of his rivals achieving success after a sticky period.

"Keep having faith," was his message.

"I look at other managers who were under the same pressure last season.

"Derek Adams was one game in nine (wins) but had a fantastic second half to the season. Steve Lomas, was I think one game in four and again he turned that corner quickly.

"Both of those clubs (Ross County and St Johnstone) were rewarded for having faith in their managers.

"I certainly believe I can do the same."

St Mirren have only managed two goals in the Scottish Premiership and seldom threatened to improve on that at Easter Road.

"We're all very disappointed once again," added Lennon, who had left-back Danny Grainger sent off late in the game.

"It was a very open game. I thought we were very brave in the way we set up.

"We had a lot of balls into their penalty area - more than they had into ours.

"But we need to have players gambling and getting into the box. That's something that we worked very hard on through the week.

"We created a good number of chances in the early part of the season and it's the same quality of players that are out there.

"Our forwards are all players who go and create and I see them do it in training.

"It's got to turn. We know any sport is a confidence game and when you are conceding in the manner we are and not picking up points confidence is low and we must try to rectify that very quickly."