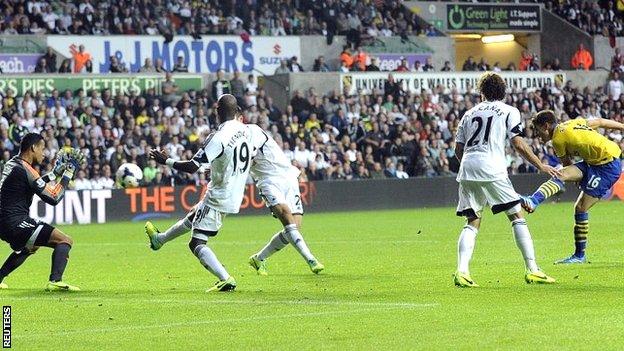 Arsenal extended their lead at the top of the Premier League to two points as goals from Serge Gnabry and Aaron Ramsey saw them to victory at Swansea.

Teenager Gnabry slotted the opener after half-time and in-form Ramsey fired in to double the advantage.

Ben Davies volleyed home to give Swansea hope but Arsenal held on.

The result extends their club record of consecutive away wins in all competitions to 12 and equals their record of eight in the Premier League, which was set in the 2001-02 title-winning campaign.

While much credit has gone to new signing Mesut Ozil, once again Arsenal's driving force was Ramsey, who joined them as a 17-year-old in 2008 and suffered from injury and inconsistency until this season.

The former Cardiff player was booed throughout by the home supporters but responded with another commanding display, playing a role in both of his side's goals and scoring an eighth in eight games.

Similarly influential was Gnabry, the 18-year-old German scoring his first goal for the Gunners in only his second Premier League start.

Both men shone against a Swansea side now without a league win in eight matches at the Liberty Stadium, where Arsenal kicked-off knowing exactly what was at stake having seen their rivals slip up earlier in the day.

They had lost only two of their previous 21 league games and it was clear to see why as their formation - 4-5-1 when defending and 4-3-3 going forward - looked sharp when under pressure and on the attack.

Coming into the weekend Swansea had the best pass completion rate in the division this season (87.3%) - and they again showcased their slick passing game, but lacked a cutting edge in the final third.

Jonjo Shelvey's early strike from distance, which fizzed over the bar, was the hosts' only meaningful effort of a first half in which lone striker Michu lacked service and was well marshalled by the Arsenal back line.

At the other end Kieran Gibbs threatened with a low cross, Per Mertesacker headed wide and Ramsey drilled off target.

There was a scare for Arsenal when Wojciech Szczesny struggled to clear a backpass, but it was the visitors who went closest as Olivier Giroud dragged wide after being released by Gnabry.

Gnabry had the first attempt on target as Arsenal began the second half positively, and it was the young winger who broke the deadlock.

The move was orchestrated by Ozil and included touches from Bacary Sagna, Giroud and Jack Wilshere before Ramsey played in Gnabry to slot his first goal for the club with a crunching finish.

Arsenal were now advancing in waves and after Michel Vorm saved well from Ozil, Ramsey doubled the lead by shooting through a number of bodies after impressive link play from Wilshere and Giroud.

Swansea wanted a corner in the build-up, and their frustration was compounded when Ramsey continued his hot streak.

When Davies exchanged passes with Bony and got in behind Mertesacker to finish with his knee on the volley, Swansea were back in contention.

But Arsenal dug in to mark Arsene Wenger's 17th anniversary as manager with what could prove to be a crucial three points.