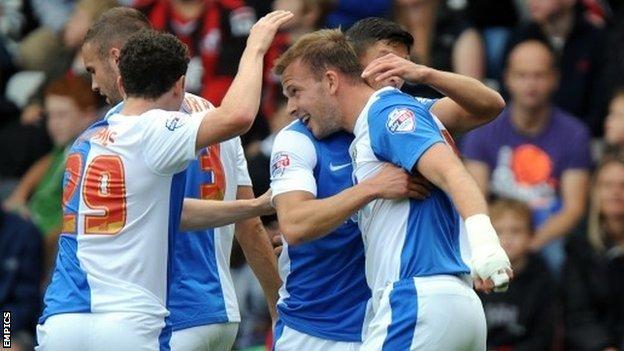 A Jordan Rhodes double helped Blackburn get the better of 10-man Bournemouth for their first away win of the season.

Rhodes headed home Leon Best's cross in the 10th minute before scoring a 41st-minute penalty after Josh King was brought down by Tommy Elphick.

In between, Best got on the scoresheet himself with a shot from 15 yards.

The Cherries had substitute Richard Hughes sent off early in the second half but pulled a late goal back through Ryan Fraser.

Hughes, who had come on as a substitute in the 33rd minute after Shaun McDonald suffered a knee injury, was shown two yellow cards in the space of four second-half minutes, but by then the visitors were well in command.

Bournemouth's Marc Pugh hit the inside of the post in the 58th minute before Elphick nearly redeemed himself for conceding the penalty, but Jake Kean produced a fine save to keep out his 66th-minute volley.

The home side got their consolation goal when record signing Tokelo Rantie turned past Grant Hanley before sending Fraser through to score.

Blackburn almost got a fourth in the closing seconds but Rhodes was inches off target when presented with the chance to complete his hat-trick.

"Jordan Rhodes has great ability in front of goal and is a natural finisher.

"His (first) goal was stunning and brave because he was prepared to put his head in where it hurts, bearing in mind he has his arm in plaster.

"We were outstanding in the first half, excellent. I'm delighted for the fans because it is a long way to come and we have given them an away win.

"We've spoken a lot about scoring the first goal - which is something we've not done until today - and we carried out the game plan perfectly."

"We were beaten by the better team and on occasions like this you have to hold your hand up and admit it.

"They have some clinical players who showed in the final third how dangerous they can be.

"We can do a lot better than that. We lost our belief when we went behind, which is strange for us.

"Richard Hughes should not have received his yellow card for the first offence, I thought the referee had a poor game."