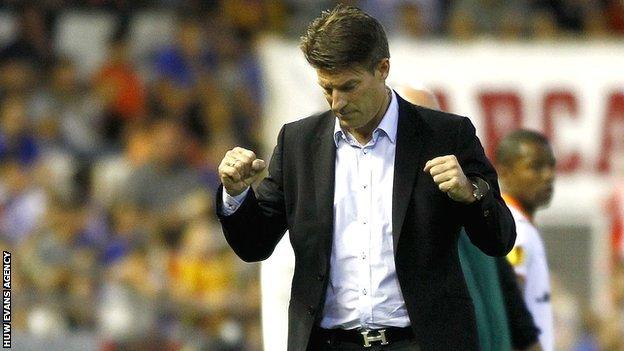 Swansea City manager Michael Laudrup has asked his players to re-focus swiftly on the Premier League after their stunning Europa League win.

The Welsh side kicked off their Group A campaign with a and travel to Crystal Palace on Sunday.

"We have another important game on Sunday in the Premier League, so we have to move on," Laudrup said.

"It's important to be happy about this result, it was a great night, but we already have to think about Sunday."

I don't know whether Ashley will be fit with his ankle, we will have to see how he recovers

Captain Ashley Williams is an injury doubt for the trip to London after the Wales defender was forced to sit out the game at the Mestalla with an ankle problem.

Pablo Hernandez will definitely miss out with a hamstring strain, while Neil Taylor is edging closer to a return from a thigh problem.

But Laudrup has no worries over Angel Rangel, although he did withdraw the Spaniard early in the second half against Valencia.

"I don't know whether Ashley will be fit with his ankle, we will have to see how he recovers after training on Friday," Laudrup said.

"But Angel is not injured, I just wanted to give Dwight Tiendalli a full game.

"With the injury to Neil Taylor we only have three fit full-backs and I wanted to give a rest to Ben Davies and to Angel as well as they have played a lot."

Swansea's next European game is at home against Swiss side St Gallen on Thursday, 3 October, and are also in the Liberty Stadium when they face Kuban Krasnodar of Russia on 24 October.

"It's only one game [against Valencia]," Laudrup said.

"Now we have two home games, we have to win those because if we can do that then things are looking fantastic.

"There's still five games [to go in the group]."