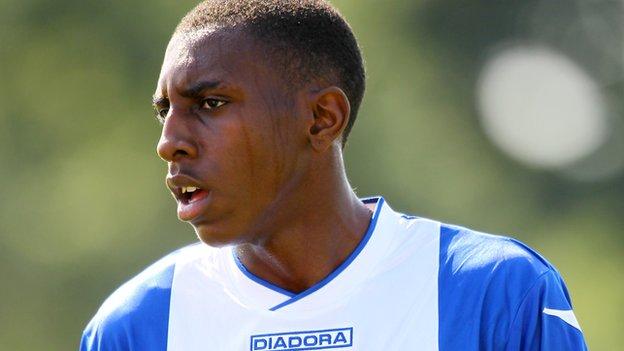 Bell, who signed his first professional deal at Blues in July 2012, penned a new one-year contract, with the option of a further year, in May

He joined Nuneaton on a half-season loan to run until January 2014.

But he has now returned to first team training with Blues.

It has been a delight to have Amari'i Bell at the club. We thank Lee Clark and his staff at Birmingham City for loaning him

And, although he is yet to make a first-team appearance for Lee Clark's side, he could be in the running for a place in the squad for Saturday's home match with Sheffield Wednesday.

Blues have been without a regular left-back since summer signing Neal Eardley was ruled out for the season a fortnight ago.

Meanwhile, Nuneaton, who went top of the Conference for the first time in 14 years on Tuesday night, must now take on Salisbury City at home without Bell.

His likely replacement is David McNamee, who filled in when Bell missed Boro's 2-0 win over Wrexham on 9 September.

"It has been a delight to have Amari'i at the club," said Boro chief executive Ian Neale. "We thank Lee Clark and his staff at Birmingham City for loaning him to us."

The 19-year-old defender, released by Blues in the summer, has had his paperwork cleared by the Football Conference.