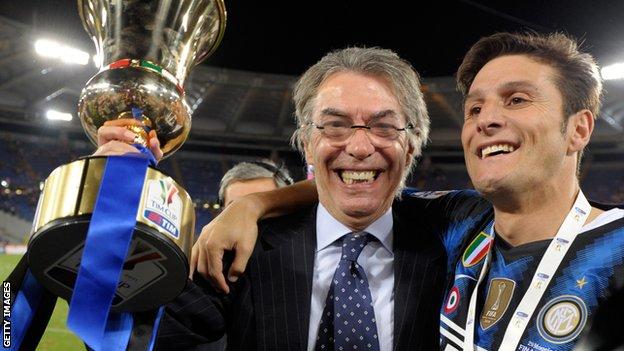 Inter Milan owner Massimo Moratti has denied he has reached an agreement to sell a stake worth almost £300m in the Italian club to an Indonesian tycoon.

Moratti has been in talks with Erick Thohir, part owner of Major League Soccer club DC United and NBA team the Philadelphia 76ers, for several months.

It had been reported the pair had agreed a preliminary, non-legally binding deal.

But Moratti said it could be another month until a deal is completed.

It is thought Thohir wants to buy a 75% stake in the Serie A club, which is making a financial loss and has debts of about £250m.

Moratti confirmed he has recently met with Thohir and other potential Indonesian investors and admitted progress has been made on the deal.

"It was an opportunity to get to know each other a bit better and also to meet the people who could come on board with Thohir in any agreement," said Moratti.

"It was more an opportunity to get to know them than to make a decision. And there are no big problems to resolve either."

Moratti became Inter president in 1995 and under his leadership the Nerazzurri have won five Serie A titles, one Champions League and one Uefa Cup.

But they have only won one Coppa Italia since Jose Mourinho guided them to the 2010 Champions League title. They missed out on this season's Champions League after finishing a disappointing ninth place in Serie A last term.

Moratti said he does not think he will remain as president under any new regime, but added he could still retain a role at the San Siro club.