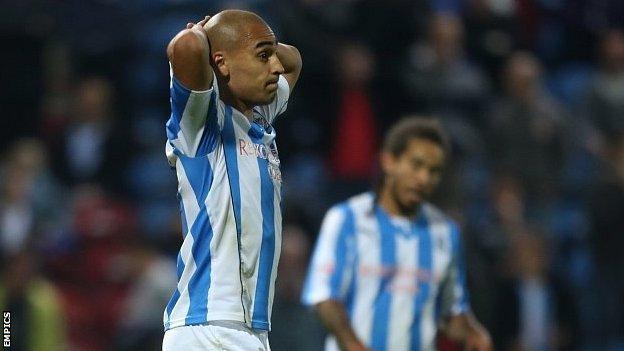 James Vaughan missed a late penalty as Huddersfield had to settle for a point against high-flying Blackpool.

The Seasiders took the lead when Ricardo Fuller sprinted on to Kirk Broadfoot's header, rounded the keeper and scored his 100th career goal.

But after Angel Martinez had been sent off for fouling Sean Scannell, Vaughan crashed his penalty against the bar.

Following Fuller's individual opener, the irrepressible Vaughan was denied an equaliser just before half-time when he was adjudged to have touched in a cross from an offside position.

But he remained his side's main threat and his powerful strike from the edge of the box was his 10th goal of the season.

The 84th-minute penalty miss, however, denied Huddersfield the chance to move level on points with fifth-placed Watford.

The Terriers are eighth, while Blackpool move up to second despite a third successive league game without a win.

"James is devastated; he beats himself up so he's really disappointed. He feels like he's let everybody down, it's the end of the world, but he'll be OK again tomorrow.

"He was very unlucky, but we've got to take those chances if we're going to climb the table. It doesn't get us any closer to Blackpool and they're in the play-offs.

"Even though it's the early part of the season we've got to keep believing and keep picking points up."

"It's very difficult to come here and dominate for the full game and you have to give them some credit.

"We're thankful to actually get over the line. We'd have been really disappointed to come away with nothing."