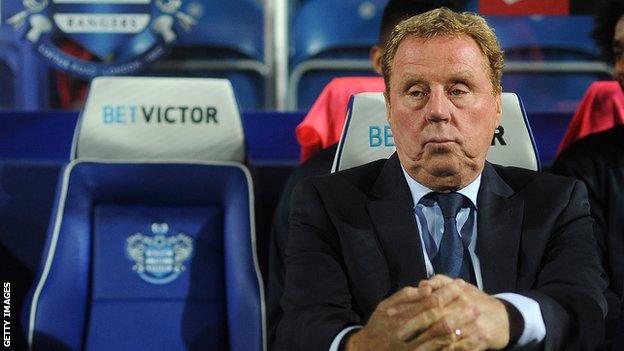 QPR manager Harry Redknapp says he will have to enter the loan market to bolster his forward line.

The R's sit top of the Championship table but have only scored seven league goals this season.

"We have got a problem at the moment as we have only got one striker," he told BBC Radio 5 live.

"Niko Kranjcar is not ready to play yet and we lack that little bit of firepower. I think it will come. I am looking to bring another striker in."

QPR's goalless draw at home to Brighton on Tuesday brought an end to a run of four 1-0 victories in the league.

With Bobby Zamora having undergone surgery on a knee injury and Andy Johnson sidelined with a similar problem, summer signing Charlie Austin is the only fit senior striker at Loftus Road.

"Bobby has had an operation and he's out until Christmas or whatever," Redknapp said.

"AJ, we're not sure when he'll be fit to play. It could be quite a while.

"Niko is just working on his fitness at the moment, certainly for the Middlesbrough game he should be fit.

"We need someone. Hopefully we'll sit down on Thursday.

"I've got a shortlist. What you're going to find this time of year is not easy but we have a couple of good names, I think."