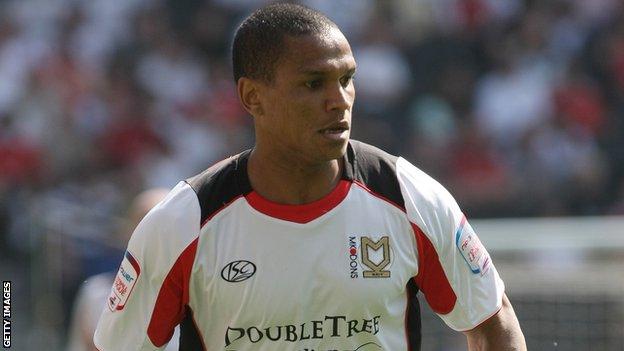 The 33-year-old was released by MK Dons in May, having made 141 appearances.

Boothroyd told BBC Radio Northampton: "He was pretty unfortunate not to get another contract at MK Dons.

"I've been wanting [to sign him] for a while. I genuinely believe he's going to be the little piece in the jigsaw that makes it all click."

The Frenchman started his career with Paris St Germain and has made more than 300 appearances for British clubs, including Hibernian.

He missed just two league matches in 2010/11 when the Dons reached the League One play-offs.

"Any team needs experience in it and strength in it," said Boothroyd.

With Kelvin Langmead out for at least another month, another experienced head will really help the Cobblers defensively.

The back four and goalkeeper are almost entirely different from last season and they will benefit from more organisation.

Doumbe has not changed clubs very often in his career - managers have stuck with him. It looks a very good signing to me.

"He's got more cuts and bruises on his head than I've ever seen in a centre-half, which is a good sign. He's brave, he's calm under pressure and he'll get his share of goals.

"He'll complement the players in the team with different skills."

Northampton's former captain Clarke Carlisle retired in the summer and current captain Kelvin Langmead is ruled out after knee surgery, necessitating the move for an experienced centre-back to join the likes of Matt Heath, Lee Collins and Ben Tozer.

The Cobblers have not kept a clean sheet in any of their nine league and cup matches this season.

"I've thought he was needed for a while," said Boothroyd.

"We didn't really get going until January last season and the reason for that was that the back four [had been] moved around. We got through it.

"A settled back four and goalkeeper is important, and although we've done well at times, you can't play well every week.

"You've got to stick to the basics and defend well and dig out results, and I think he gives us that bit of experience."